We don’t often endorse things but we had a particularly trying time renting a car in Costa Rica. We prefer to rent cars when traveling. Public transit is great but having a car offers a next level of freedom that you don’t normally get with buses and trains. We like to get off the beaten path and explore on our own schedule. In most places that is totally fine, but Costa Rica poses a few more hazards than most other travel destinations. The roads are dangerous, the traffic can be horrendous, and the rentals can be prohibitively expensive.

If you’re going to rent a car in Costa Rica

Our recommendation for renting a car is Adobe Car Rental. They’re not perfect, but probably the best car rental company you’ll find in Costa Rica. They did such an amazing job making sure we were well taken care of after the local Hertz office tried to swindle us. They have high ratings on Google and earned every one of their 4.6 stars.

We rented in the low season for three weeks in October and Adobe worked with us on the price for the last minute booking. They were also very accommodating when it came to declining the CDW and LDW insurance. Normally rental agencies will let you decline collision insurance if you have coverage through a credit card. In Costa Rica, most places require a printed letter from your Benefits Administration Dept stating you have coverage. We didn’t have the letter but they kindly let us call our Chase Sapphire benefits department on their phone and we had Chase email our proof of coverage to Adobe and that was enough. Rental agencies make good money on insurance so it was nice of Adobe to let us use their phone and accept a digital letter when the other agencies won’t. 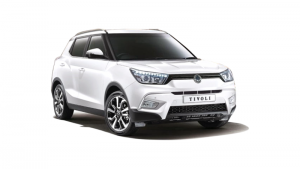 I had never heard of Ssangyong before but I wasn’t a fan.

Their fleet is very new although I didn’t care for the Ssangyong Tivoli they gave us. You’d be better off with a Hyundai instead. Our cheap Ssangyong broke down twice. The first time was in San Jose, the day after picking up the car. The belt snapped and we were stranded for about an hour. Adobe showed up with another rental as fast as they could while we ate ice cream. We were quickly back on the road but had to swap out the car again in Jaco when the engine starting having power issues. But once again, they had us in a replacement car at a speed I didn’t think was possible in Costa Rica. We pulled up to the Adobe Rental location in Jaco in the middle of a torrential downpour. The office was closed so we called the emergency number. They got someone to the location and we were in a new car within an hour. I’d rather the car didn’t break down but we were impressed with the quick service without any hassle.

Would we rent again? definitely.

Overall we have only nice things to say about Adobe. If we return to Costa Rica in the future we will definitely rent from them again. If you take a look at the other agencies reviews, you’ll notice a clear difference in service. They’re fair and dependable which is exactly what you want when driving on the crazy Costa Rican roads.

For the record, we were not paid in any way nor did we get any kind of discount to write nice things about Adobe. We genuinely had a good experience and want you to know about it!

We didn’t take any pictures of the car itself but plenty from inside the car.

In case you’re looking for a good web host, we’d recommend SiteGround. Yes, this is an affiliate link, but we wouldn’t recommend something that wasn’t great! We’ve used many different hosts with many different clients and SiteGround is our current favorite as a great balance of price and performance.