We took a few days off to leave the city and explore some of the Hungarian countryside. The countryside btw isn’t much to marvel at being mostly flat. We did pass a significant amount of sunflower farms, that was a first. Our first day trip took us north to the quaint town of Szentendre and then on to Esztergom. Szentendre was pretty boring and could have been skipped in all honesty. It’s billed as a quaint town with “artisan shops” which really means it’s a place where tourist busses stop for mass produced souvenirs and a stroll through the town. It’s not a terrible place but our time would have been better spent getting to Lake Balaton which we ended up not seeing at all. 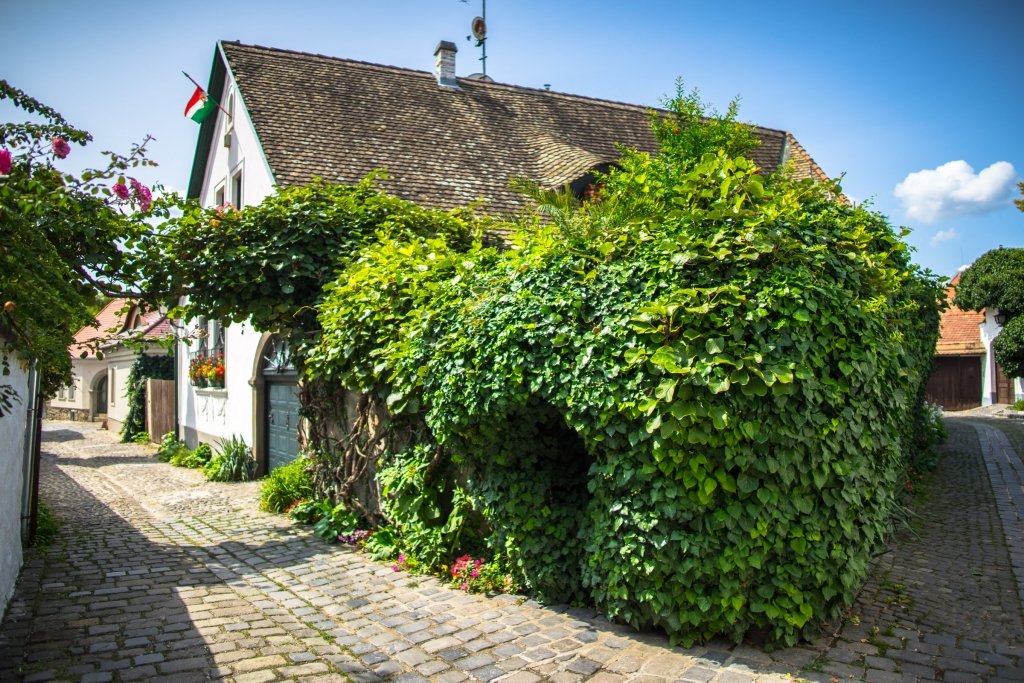 Szentendre had some quaint bits like this house but mostly the town was pretty uneventful. 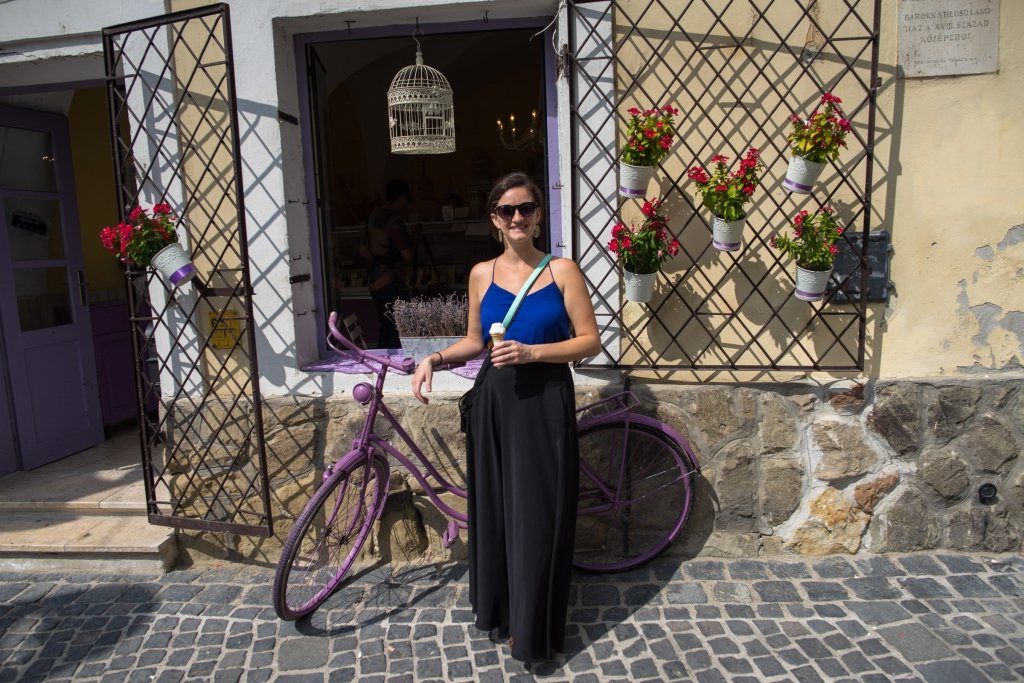 We did stop for some lavender ice cream at this little shop but we found out later they have another location in Budapest. We never had to leave the city!

Esztergom and the Massive Basilica

The second town we stopped at was Esztergom on the border with Slovakia. There’s a massive Greek style basilica in the center of town that was fun to explore and climb to the top of the dome. The Esztergom Basilica is an impressive sight and dominates the town. It’s no surprise that it’s the tallest and biggest church in Hungary but we were also surprised to learn that it’s the tallest building in all of Hungary at 100 meters tall. We climbed all the way to the top of the dome for some incredible views of the town and across to Slovakia. Also while mentioning big things it contains the world’s largest painting on a single canvas behind the altarpiece. It doesn’t look that big when you’re inside, probably due to the massive scale of the basilica. 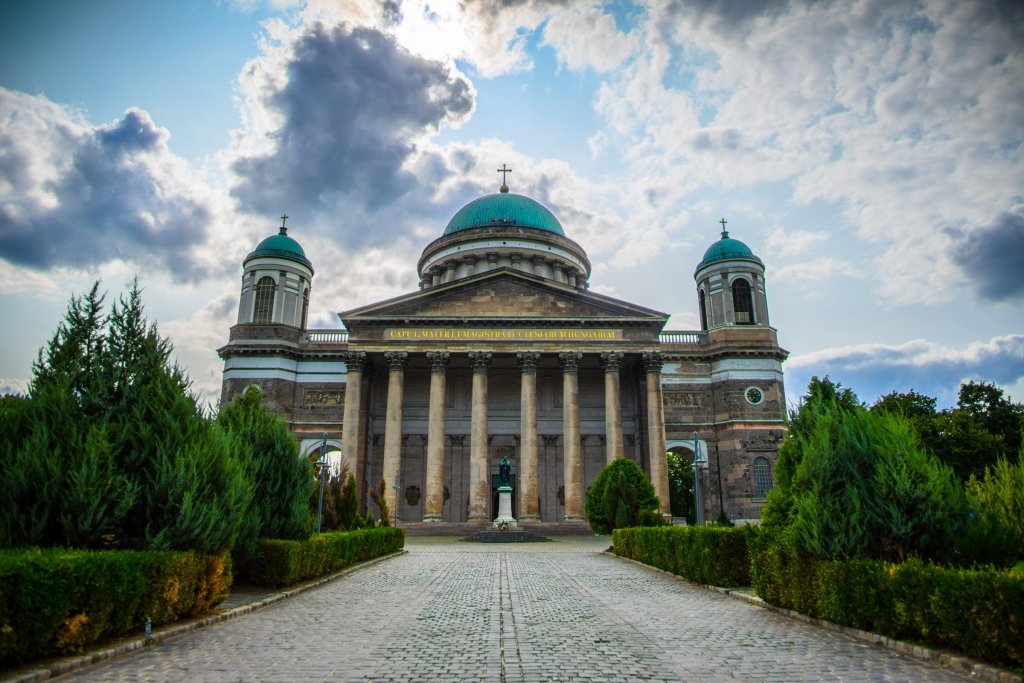 The basilica sits on top of a large hill making the views from the top even more grand. 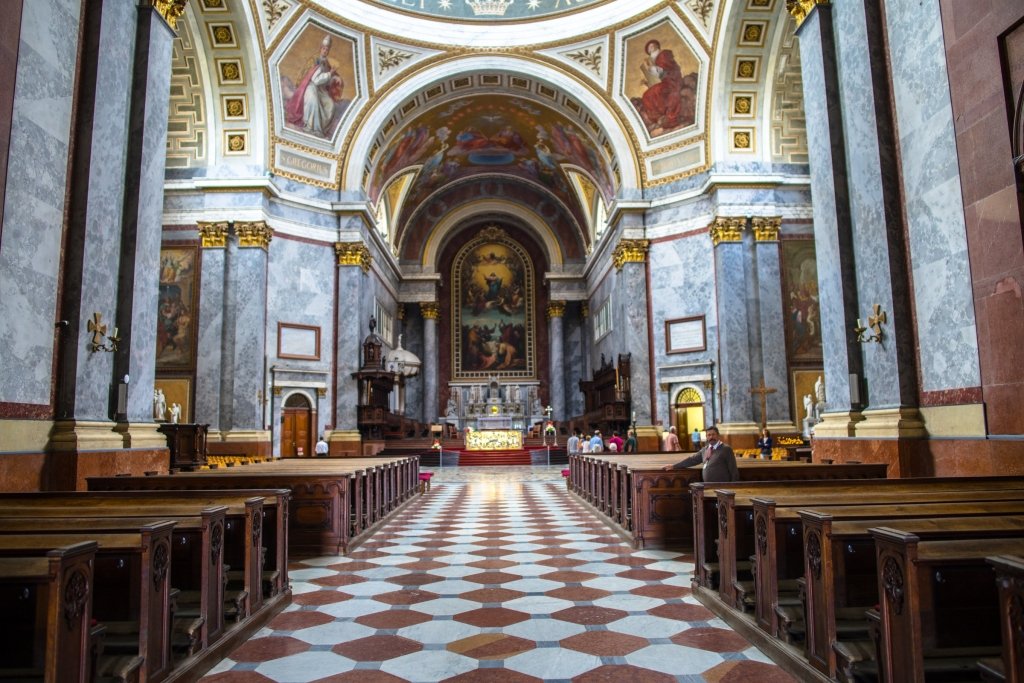 A view inside the basilica. You can see the Assumption of the Blessed Virgin Mary, by Girolamo Michelangelo Grigoletti behind the altar. The largest painting in the world on a single canvas. 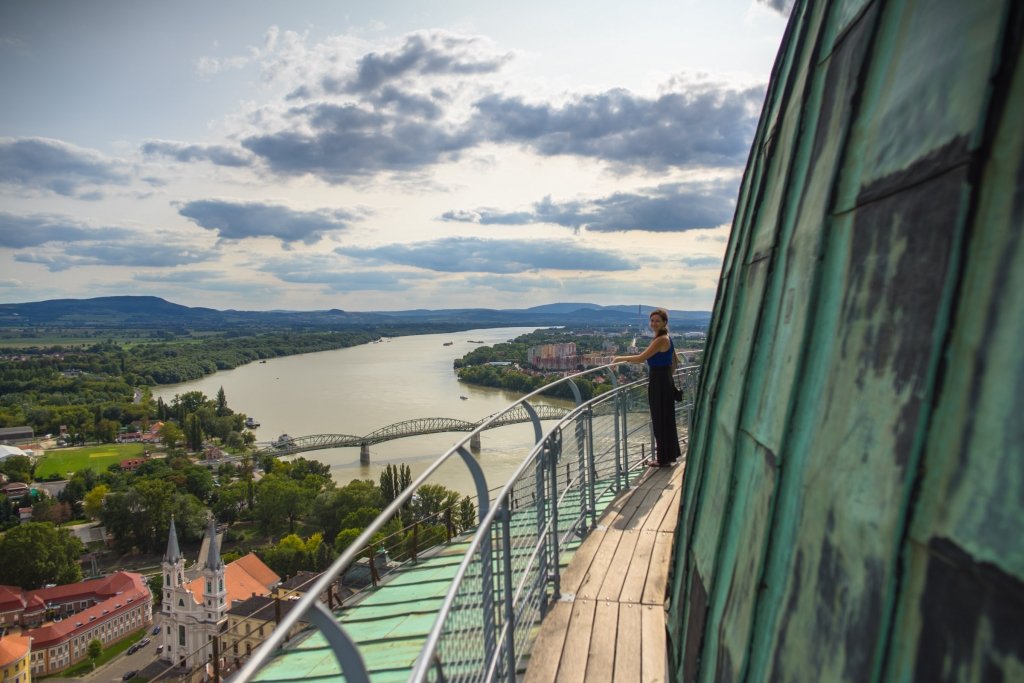 The views from the top were pretty nice. 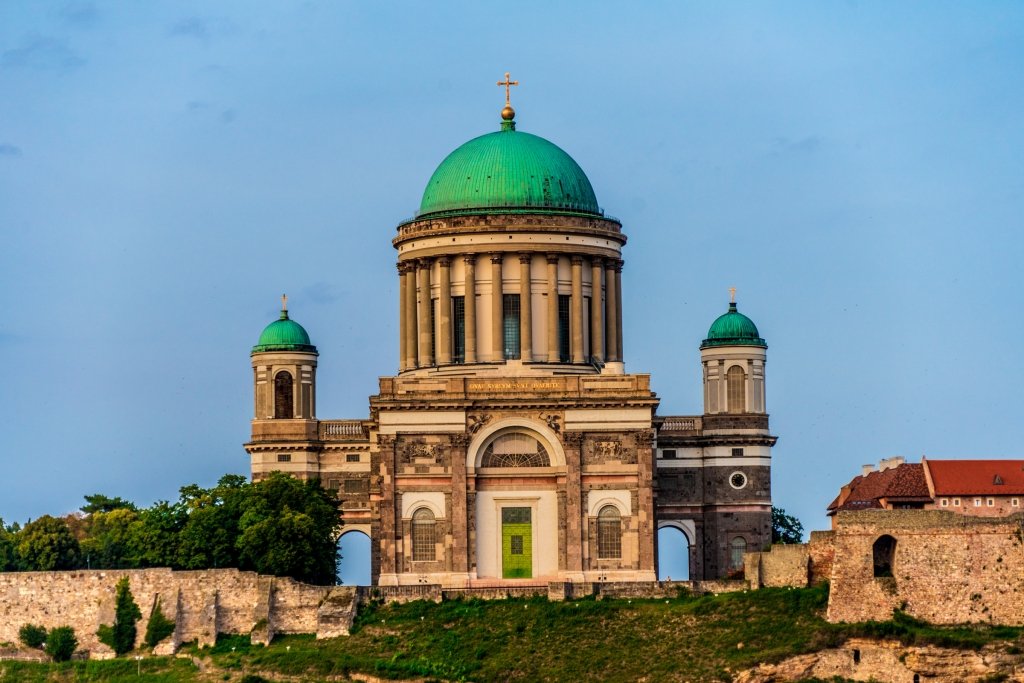 Another view of the Esztergom Basilica from across the Danube.

Walking to Slovakia for a Beer

My favorite part of the city was walking across the bridge to Slovakia. It might sound silly but we had never walked to another country before, so we decided to walk to Slovakia for a couple of beers. It turns out that walking to another country is pretty anticlimactic. Going from one EU country to the next is just about as exciting as crossing state lines in the US. No border guards or stamps. Just a sign to let you know you’re in another country. Other than that it ended up being a great spot to take in the view of the basilica from across the river and watch the many Viking River cruise boats slide by. Technically we can also cross another country off the list right? Someday we would like to actually see Slovakia beyond the Popeye bar. 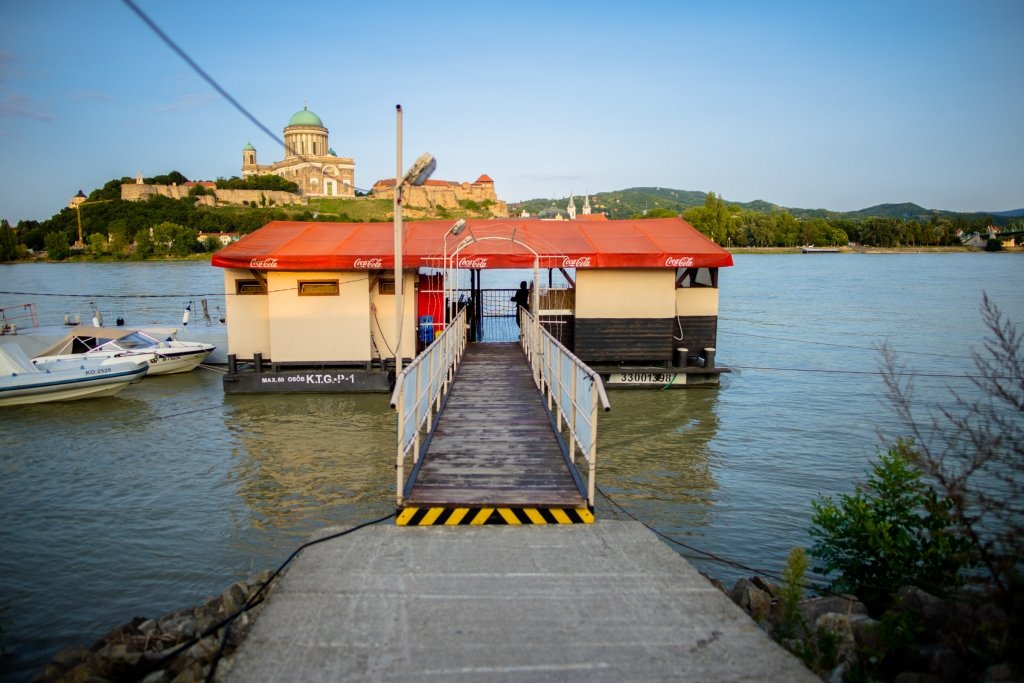 The floating Popeye bar on the Danube 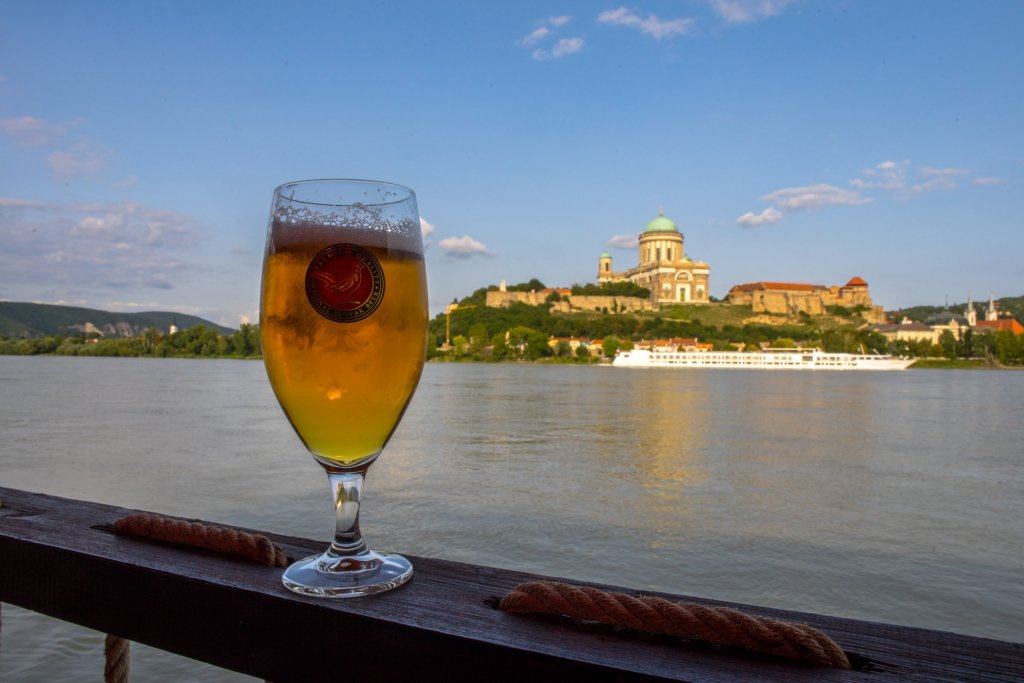 Beers and views. Thanks Slovakia

The next day we drove out to Eger to see the castle, the old town and sample the “Bull’s Blood” wine that comes from that region. Hungary is very proud of their wine and has some decent varieties that I cannot pronounce. That may contribute to the reason why you don’t see many Hungarian wines on shelves across the globe. Egri Bikavér doesn’t roll off the tongue quite the same way as Cabernet Sauvignon although ordering a glass of Bull’s Blood sounds pretty badass as far as wine drinking goes. We are in no way wine experts but to our untrained palates, the wine is really good.  Eger also had a camera obscura at the top an observatory. A camera obscura is a really cool invention that is a mix between a telescope and camera. They work by focusing light through a lens and projecting it onto a surface. The one at the top of the observatory poked out the top of a tall building in the center of town. After climbing to the top of the tower, you enter a small dark room where the image is projected onto a table in the center. The camera obscura can be moved around like a periscope and from the tower, you can spy on the surrounding town on what looks like a 18th century television. 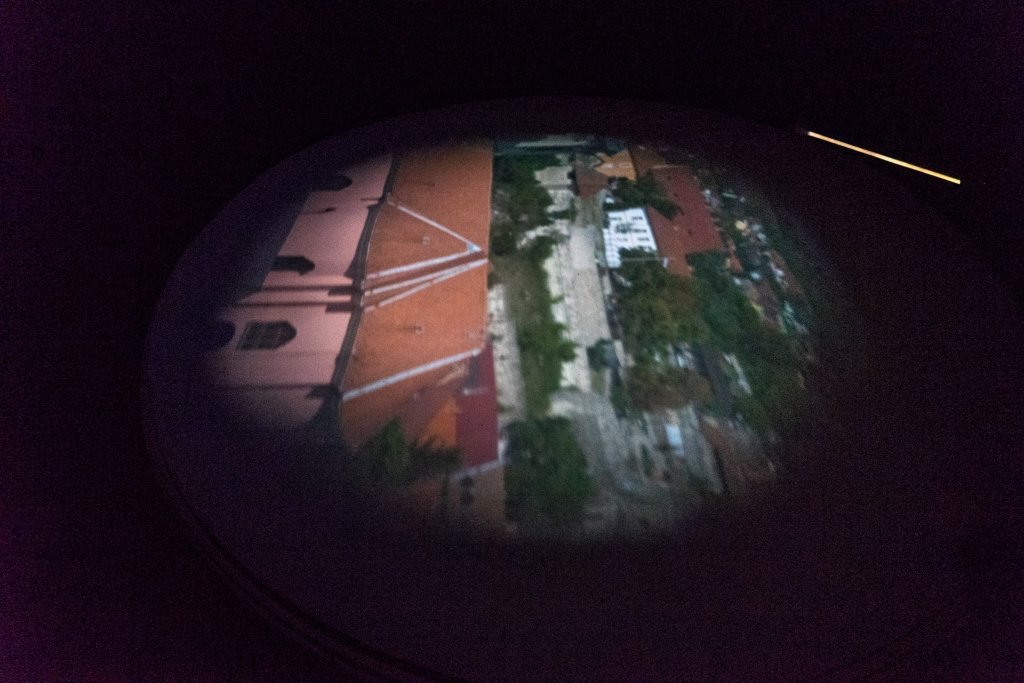 A projection of the camera obscura all done with glass and mirrors. 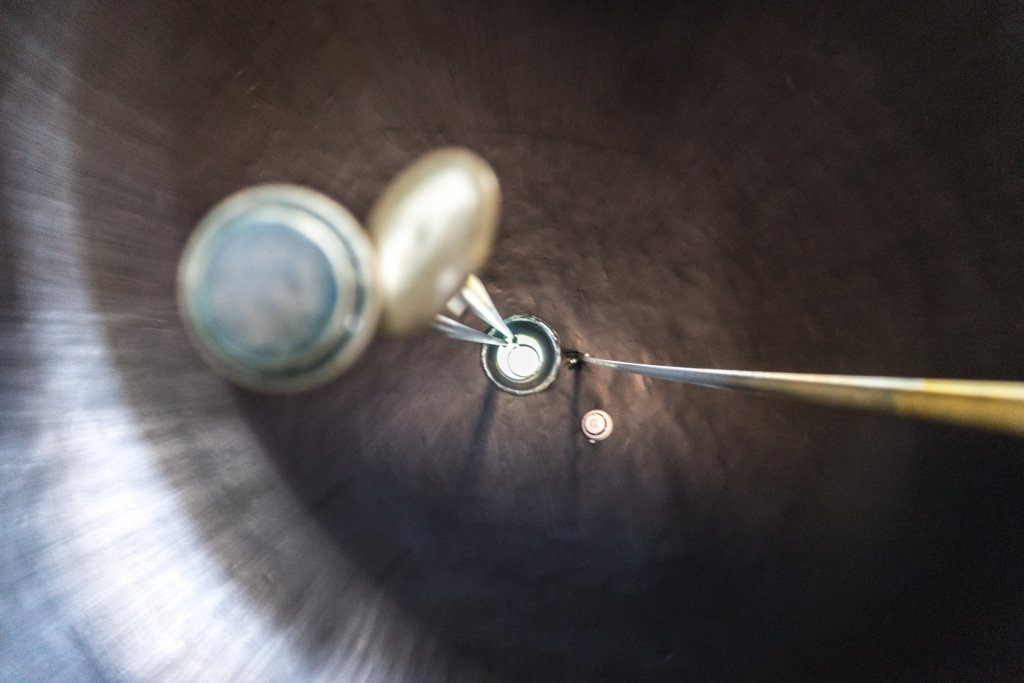 Looking up the pipe of the obscura with the levers hanging down.

The last stop on the way back from Eger was another geothermal bath that was built from a cave system. Sounds pretty cool right? If your idea of cool is hundreds of screaming children trying to see how far their voice can echo in a cave bath, then this place is for you. Other than the screaming children, it was an interesting bath that had various pools and rivers flowing in and out of the cave system. Large communal baths aren’t really that appealing to me as I’d look for more quiet and relaxation than a tepid water park with minerals.

Looking back I wish we had visited Lake Balaton instead of Eger. If you don’t have a ton of time, it might be best to stick to just Budapest. We also didn’t plan out the day trips very well. We were really busy with work and realized we had to rent a car and get out if we wanted to see anything outside the city which made it feel like a crazy rush.