One of the quintessential things to do in Venice is to take a gondola ride. Being on a honeymoon of sorts we had to indulge ourselves a bit with a romantic (I know, Derek being romantic blegh) ride through the canals. The most interesting part was talking to our gondolier about his take on Venice and occupation.

The rides are short and are typically done throughout the day and just after sunset. It was on our list of things to do and kept getting pushed off since the gondoliers are ever present, beckoning all to come for a ride, especially strolling couples. We stopped by a few to scope things out and discovered that the prices seem to be set across all gondoliers. €80 for a half hour daytime gondola ride and €100 for a half hour gondola ride after dark. Being the stingy person that I am, I knew there was a deal to be had. We quickly found that out by simply looking at the sign and price, and then walking away the gondoliers would hurry after you to lock in a deal. By our first steps away over the bridge the price dropped €10 then €20.

We opted for a nighttime gondola ride, not by choice but rather we had run out of time to go during the day. It ended up being really great at night. There was no traffic, the water was calm and the canals seemed so much more mysterious in the glow of the city lights.

We lucked out with a great gondolier, Nikolai. We had heard that some gondoliers would sing to you our give you a guided tour of the canals. Most of the boats had sullen looking gondoliers silently paddling by. Nikolai not only gave a great tour but also sang to us! That might have been due to the beer he had been drinking while on our ride. Whatever floats your boat I guess. After pointing out all the normal sights around the canals including the houses of Marco Polo and Cassanova, we got talking about what it takes to be a Gondolier.

Nikolai said it takes about 5 years to become a gondolier, with lots of training and an intense test. You also need a type of permit that sounded similar to NYC taxi medallions. It also seems to be an occupation passed down from fathers to sons. Each Gondolier works out of a specific spot specified by their license. They share the spot with other Gondoliers on the license. They each own their own boat and are responsible for its upkeep. He grew up around his grandfather’s gondola and decided to pick up the family trade. They are busiest in the high season from May to September often working 12 hour days, getting as much use of the daylight as possible. They work long hours in preparation for not working much in the winter, not because of the cold but because the high water prevents them from fitting under the bridges. Nikolai explained that you have to be Venetian to be a gondolier and if you see a gondolier of any other nationality, you’re not in Venice. He then lamented on the recent changes of Venice making the city impossible to live in. It sounded like a tale heard all too often of cities becoming unaffordable for normal people looking to make a living. He said that the only Venetians still living in Venice are the older generation. The younger Venetians have since moved to more affordable locations inland to mainland Venice and Padua, or as Nikolai called where he lived as, the New Jersey of Venice.

The propulsion of the gondola consists of a single long paddle that rests on a forcola that to me looks like a funky carved wooden horn. We even saw one fashioned into a door handle that only furthered my obsession with Venetian knockers. The forcola is shaped in a specific way to assist the Gondolier with positioning the oar in different ways for steering and propulsion.  I think my favorite part was the commands they called out to alert oncoming traffic. When rounding a corner with no visibility, the Gondoliers call out in a loud voice “Stagando Oeh!” to alert oncoming traffic of their approach. On the canals the gondolas have the right of way at all times, followed by the vaporetto, which has a can’t stop won’t stop policy, followed by all other craft. That said, I think the Gondoliers mostly avoid the Grand Canal in favor of the smaller ones.  The inner canals are extremely tight in some places and that’s when you can see their five years of training come into practice. They expertly glide around clumsy boats and vaporettos, within mere centimeters, without breaking a sweat. 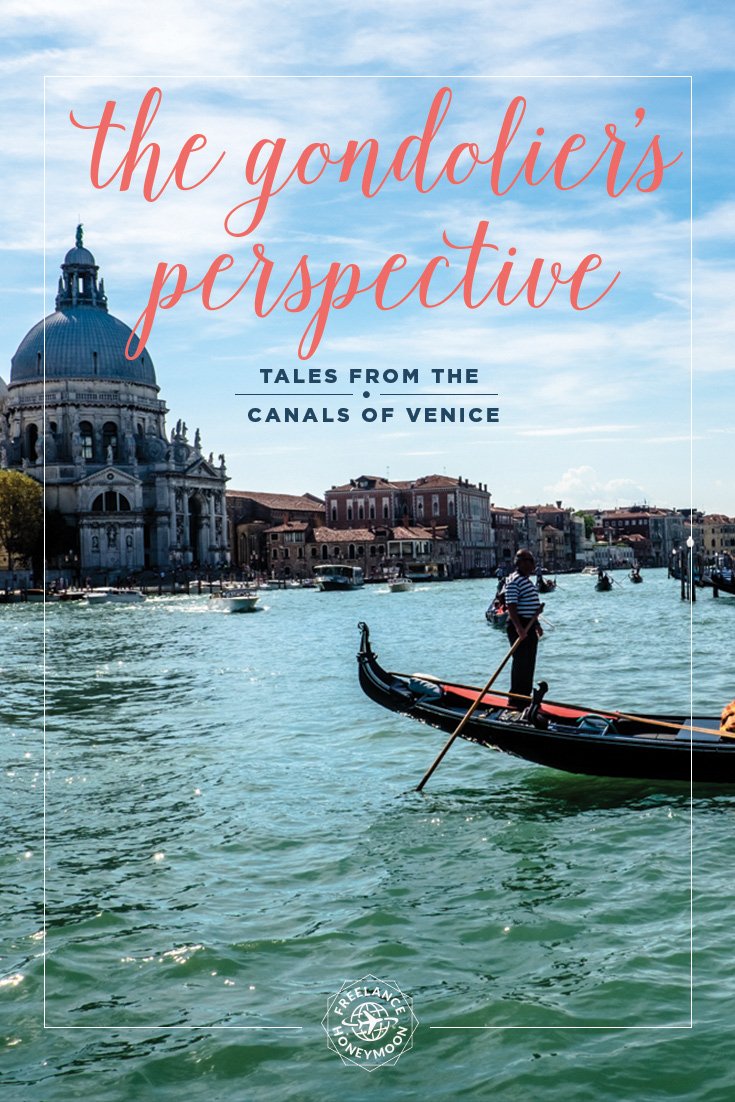