If you go to Australia and don’t see a kangaroo, have you really gone to Australia? I guess we didn’t really go to Australia then. Lauren was a bit bummed that we didn’t see any kangaroos. From the pictures we drew in our heads, there would be Joeys hopping around everywhere. We spent about 3 weeks on Australia’s east coast from Sydney all the way up to Cairns. Not a single Kangaroo. We did however witness a wild Cassowary with three chicks crossing the road on a trip to the Daintree Forest. This we were told, was a rare sighting and should count ourselves lucky.

As our days in Australia were coming to an end, we realized we probably would not get to see a living breathing kangaroo. The next best thing would be to eat one. After a few days in a row cooking in nasty hostel kitchens, it was time for a meal out. We happened to be walking by KC’s Grill in Airlie Beach and saw a sign that read “Kangaroo burger”. I couldn’t turn it down. So in we went to the restaurant and plopped ourselves down to order. The waitress explained that there is only one way to order kangaroo and that is as rare as possible. She elaborated that by cooking the meat too much, it becomes tough and rubbery. We obliged and orders them rare.

The burgers came shortly after accompanied by some fries and a schooner of Great Northern. The fluffy bun was stuffed with three large cuts of kangaroo steak slathered in BBQ sauce topped with lettuce and beets. For some reason I was expecting ground kangaroo for the burger instead of steak cuts. The first bite was juicy and delicious. It tasted a bit gamey like the waitress described but it was mostly tender and was gone pretty quickly.

I don’t think its something I would eat frequently but it was good to try. Probably one of the more exotic meats I’ve eaten. I still would rather have seen a living kangaroo but for now, this will have to do. 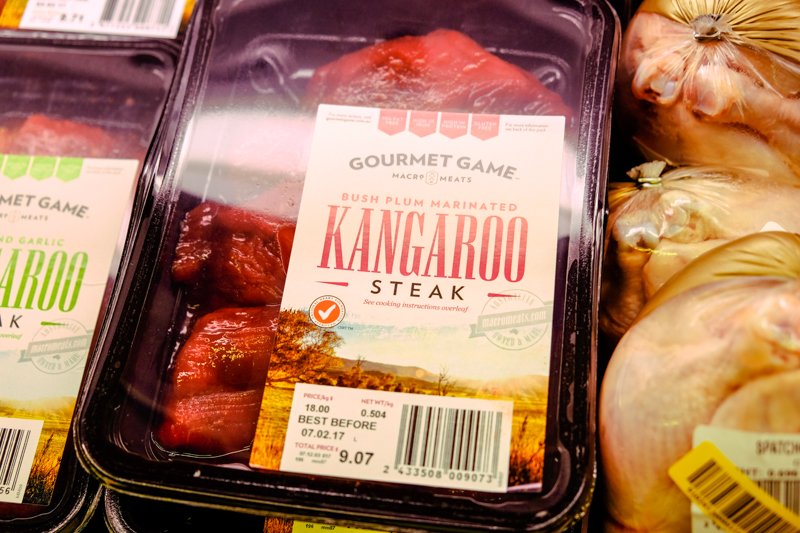 Some Kangaroo steaks spotted in the grocery store. Not a bad price!