Do not rent a car in Costa Rica.

Costa Rica has some of the worst rental conditions and rental companies we’ve ever experienced. We’ve rented many cars around the world and nothing compares to the shadiness of some of the car rental agencies there. Costa Rica can be a messed up place of backwards bureaucracy and corruption. This is not what you want to deal with when renting a vehicle and accepting the massive liability that is driving on Costa Rican roads. Not all agencies are bad, there are a few good ones in the bunch if you can find one. We felt safe with Adobe Car Rental who definitely earned their high Google rating.

If you do intend on renting, here are the biggest things to be aware of that aren’t immediately clear:

The Major Rental Agencies Are Not What They Seem

You might see Hertz, Budget, Avis, and Enterprise offices when looking to rent a car, and think you can feel safe with a trusted brand. You would be sorely mistaken. None of the major rental brands actually have offices in Costa Rica. The Hertz location you think you’re going to is actually a local company that is only licensing Hertz’s brand and name. It is not an actual branch or even a franchise. Hertz Global or any of the other company’s head offices will not actually help you when it comes to any issues involving your rental because you’re not actually renting with Hertz. You’re renting with “Manuel’s Car Co.” that is allowed to use Hertz’s logo. This is common in many countries but especially troublesome here. Doing business in Costa Rica is extremely complicated and most global brands would rather not deal.

There Are No Rental Cars At The Airport

The major brands all say they have a location at SJO. This is a massive stretch of the truth if not a complete lie. What they do have is a kiosk with a guy sitting there, who then drives you a few miles away from the airport to the actual rental car company. They do offer free shuttle rides but that is not the same as having a location at the airport. Keep this in mind for when you’re planning out your pickup/return timelines.

The rental prices are absurdly high in the peak season and even in the low season. You can talk them down to ridiculously low base rates on the car but in the end, they get you with inflated “mandatory insurance” and other fees. These fees will end up far exceeding the daily rental rate.

Costa Rica has a lot of laws and regulations. Some of them make sense and others seem to cause more harm than good. Car rentals are not exempt and are required to have insurance provided by the government (what could go wrong there?). There is also no opting out of it. The rental companies in turn, takes advantage of the confusion and are not upfront about what type of insurance is actually mandatory and what is not. Once you get them to remove all optional coverage you’re still left with the mandatory SLI coverage. The problem is that the rental companies pay the government a very low fee for the insurance but jack up the price for you. They make it seem like there’s nothing to be done about it but you might have some luck negotiating that down as well.

Declining CDW/LDW with your Credit Card

A lot of credit cards offer really amazing comprehensive rental coverage as part of the card benefits. Lauren and I take advantage of that anywhere possible. No surprise that in Costa Rica that declining CDW and LDW comes with a bit of extra work. Most of the time we can simply decline CDW/LDW. In Costa Rica, even if the rental company will consider letting you decline, you will need a printed letter from your credit card’s “Benefits Administration Department” that proves you have coverage. If you’re lucky like we were with Adobe, they will kindly let you call from their phone and ask for a letter via email and verbal confirmation. The rental agencies make bucket loads of money with their additional insurance so it’s in their best interest to scare you into buying the highest level of coverage and making it as hard as possible to decline. Just make sure you follow all the rules and conditions as stipulated by your credit card company because you will definitely want coverage in Costa Rica. If you don’t get coverage through your credit card, you should definitely suck it up and pay for their coverage, just try and negotiate it down.

As if overcharging you for insurance wasn’t bad enough, some rental companies in Costa Rica make you sign blank credit card authorization forms and blank damage reports before turning over the keys to you. Why is this bad? You’re basically signing a blank check to the rental company to charge you for whatever they want. I’ve heard of some instances where people have returned their car in perfect condition, only to find out that the rental company charged their card and submitted damage pictures from a different vehicle. Since the renter signed the blank forms, the rental company just has to fill in the blanks on the damage report and CC authorization the renter signed and there’s no way to fight back. There’s a reason for all those bad reviews. Read them!!

We had a bad experience with Hertz that ended with us ripping up all of the paperwork and canceling the reservation. We initially got our 3 week rental down from $950 to just under $400 by declining CDW/LDW and negotiating down the mandatory government SLI (yes you can negotiate the SLI). We thought it was a good deal until it came time to sign the blank credit card authorizations and blank damage report. I asked why I had to sign a blank damage report if there was no damage and they replied that this was common practice. It might be common among rental agencies in CR but that’s a really bad position to put yourself in as a consumer. I was also denied when I tried to take a picture of the forms for my records to show that they were blank at the time of signing. In hindsight I really don’t know why I even considered signing the forms. That was the last red flag and then we decided to cancel the whole thing. We felt stranded since we were already a shuttle ride away from the airport and it was getting late in the evening with no other rental prospects. 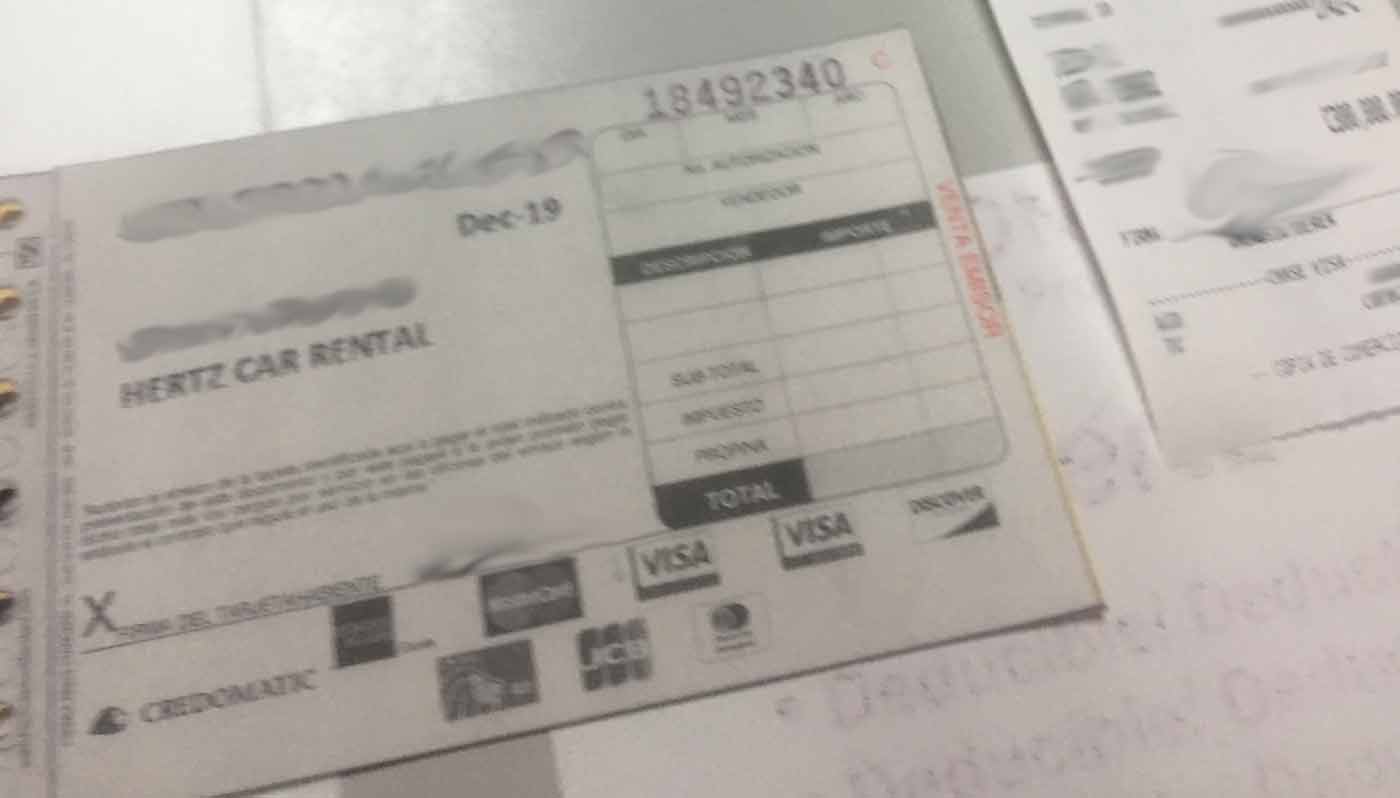 This was the only blurry shot I could get of the blank forms before I thought better and ripped them up.

So what are you supposed to do?

If you really want to rent a car in Costa Rica, I’d suggest Adobe Car Rental, you can read about our experience with them here. They were really upfront about their policies and didn’t force us to sign sketchy forms and blank checks. They put a hold on our credit card as a deposit for the car which is standard practice around the world. No blank credit authorization forms needed. The comfort we felt with them was night and day difference compared to Hertz. They’re still not perfect but probably the best bet you’ll have in Costa Rica.

We weren’t paid by Adobe Car Rental to write nice things about them at all. We just had a genuinely good experience compared to the other companies we tried renting with and wanted to share.

If you’re going to rent a car, do your research first and make sure you read everything you sign.

Good luck out there!