The thing I was most excited for in Australia was diving the Great Barrier Reef. There are lots of tour operators and lots of horror stories. Coral bleaching, 8,000 divers all at once, divers left behind etc. We had heard that going to the “outer reef” was a more enjoyable experience, it had yet to be ruined by too many divers. The stories tell of the bad divers and snorkelers not only touching the coral (a huge no-no!) but also STANDING ON IT AND KICKING IT. Hundreds of years of growth, destroyed in an instant. 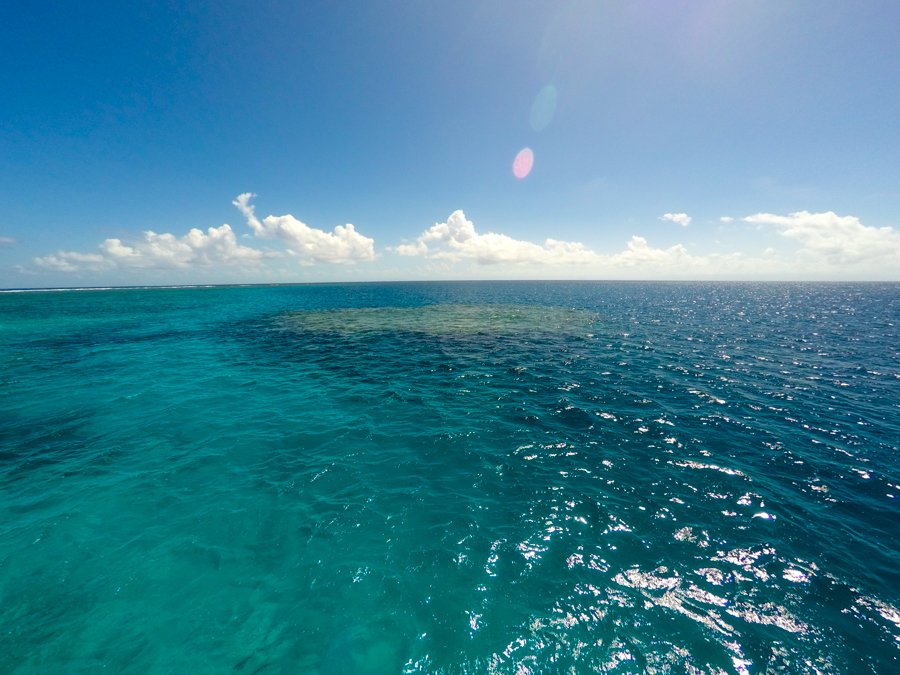 Ready to jump in!

So we were apprehensive when we showed up to our dive boat. We booked through a travel agent who put us on the boat Poseidon, heading to the Agincourt Reef. The reviews were plenty, and fairly positive. The boat fits 70(!) people. Luckily for us it was only half full on the day we went and mostly full of snorkelers, those silly, floaty buggers. We only had about 7 divers in our group.

We did three dives, and all of them were pretty great. Our divemaster was new to the company and so she was being shadowed by a more experienced crew member. We got two dive guides for the price of one! They were both very well informed on all that was going on in the reef. 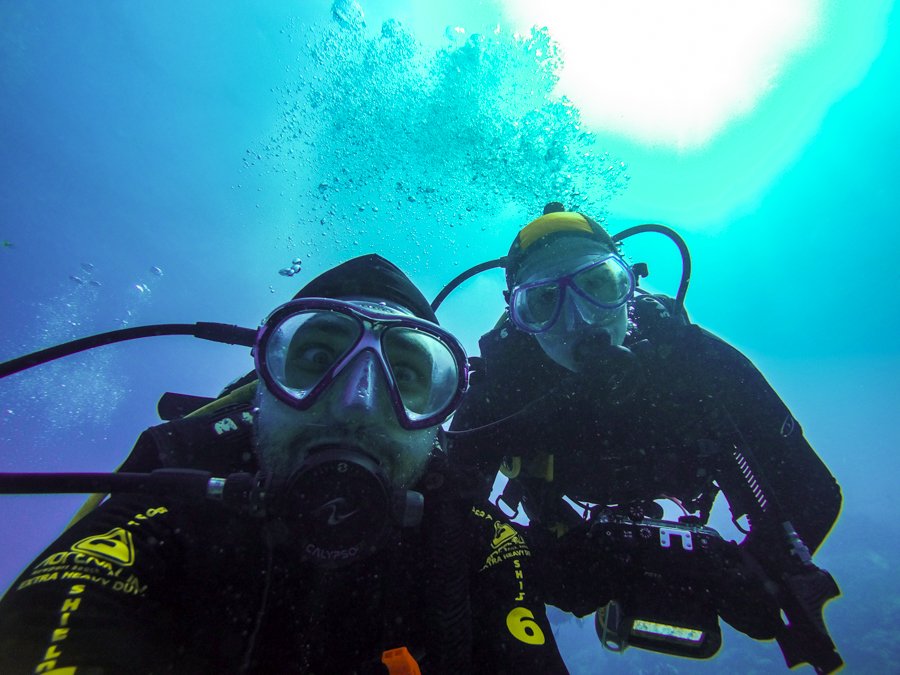 The biggest concern that Derek and I had were the jellyfish. We chose to visit Queensland during their summer, which also translates to jellyfish season. And I’m not just talking about ouch-i-got-stung-this-hurts-for-a-few-hours. I’m talking the irukandji. Those fuckers will kill you. So obviously it was a big concern. In the end, our fears were put to rest by the safety measures that the crew had us take. We wore full stinger suits (think wetsuit) complete with head and hand coverings. 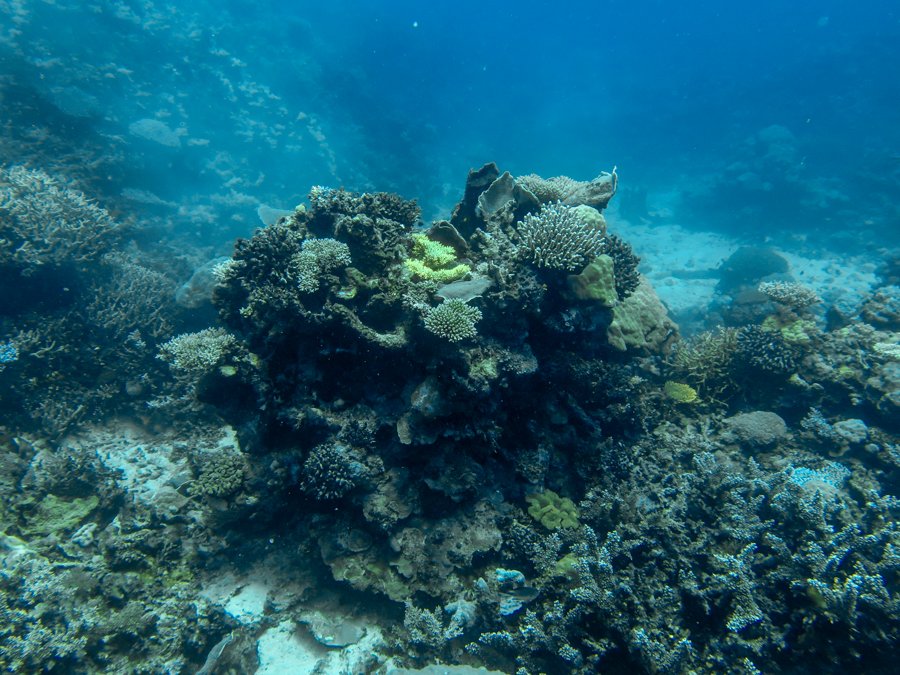 The colors are hard to capture on camera – underwater they are so vivid and bright!

Neither of us saw any jellyfish on our dives. Though we did see the most incredible coral. And gigantic clams. And a shark! And a turtle!! This was a pretty big diving day for both of us, we had only ever done two dives in one day and had only dived once in the past year. So three was pushing it a little in terms of what our bodies and ears could handle. As always, diving feels like the closest you can ever come to flying. These dives were calm and comfortable – which we’ve learned isn’t always the case with some dive companies. I couldn’t get enough of these gigantic clams, I’m talking like 3-4 foot clams. With electric blue and green edges. 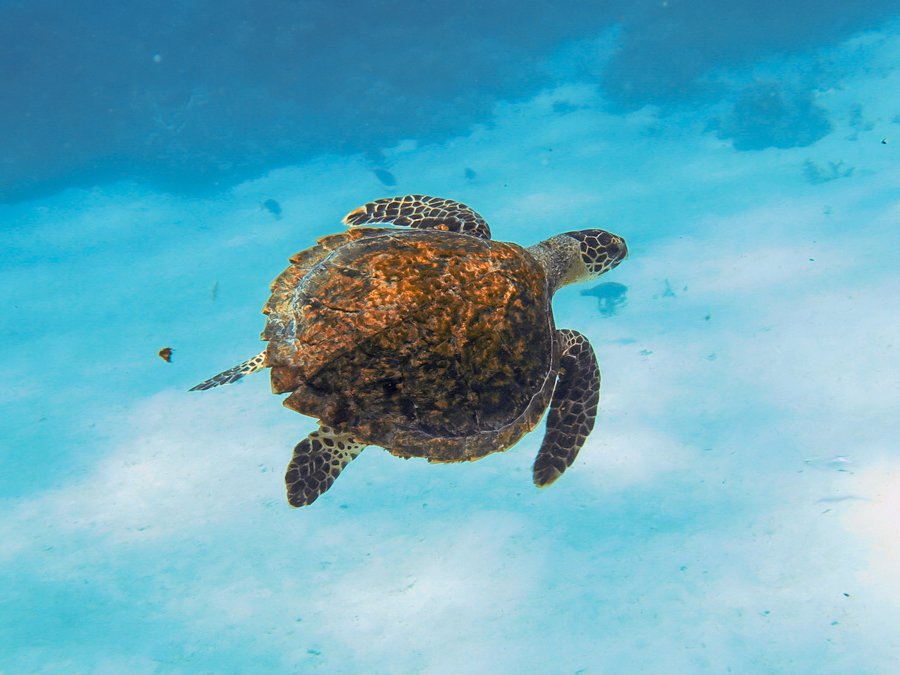 This guy was about 2 feet long, kinda small! 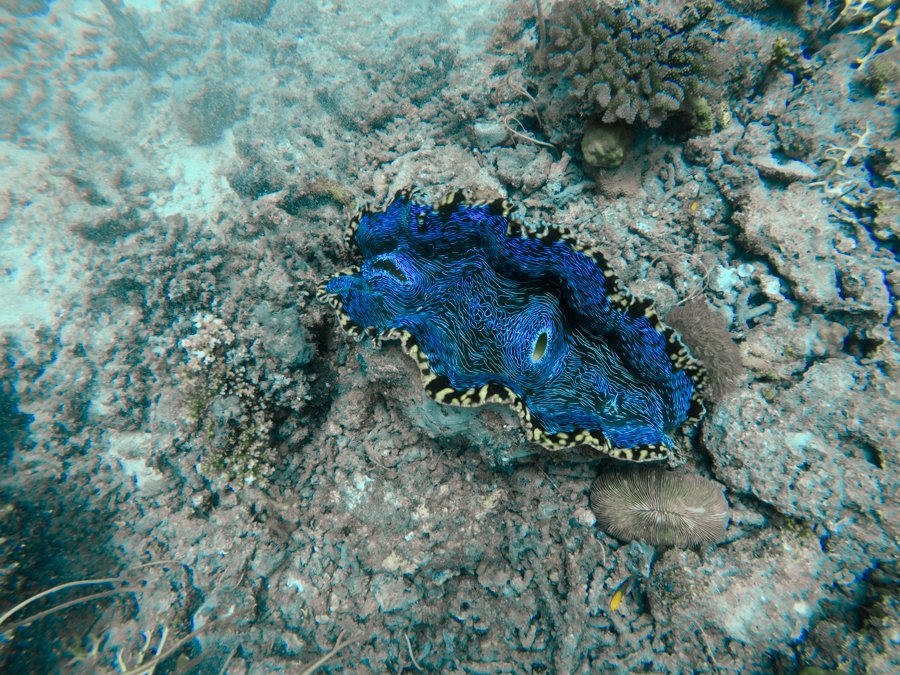 It was hard to take a photo, as soon as you swam close, the clams started to close up! 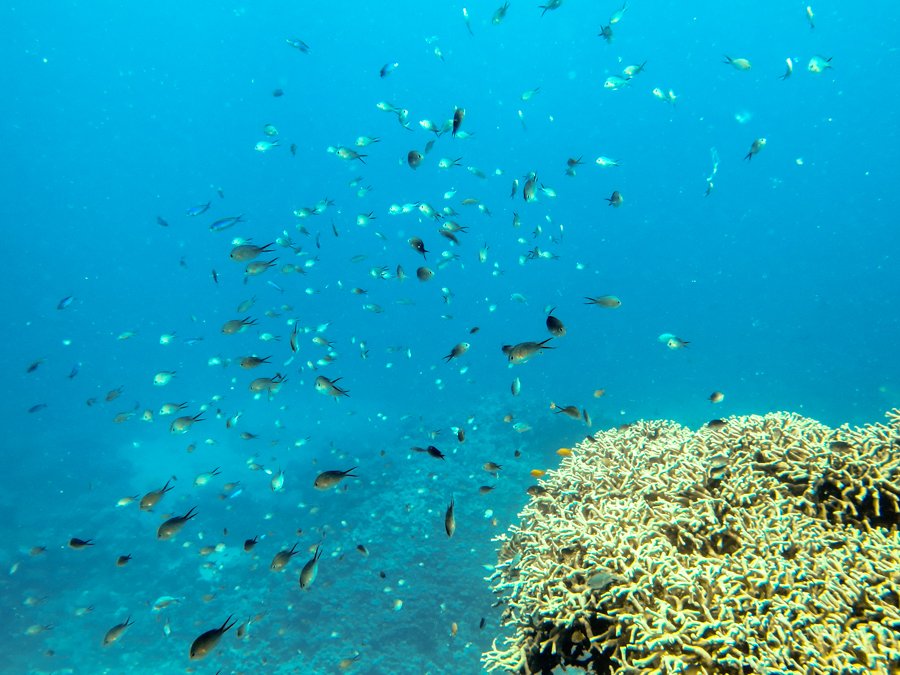 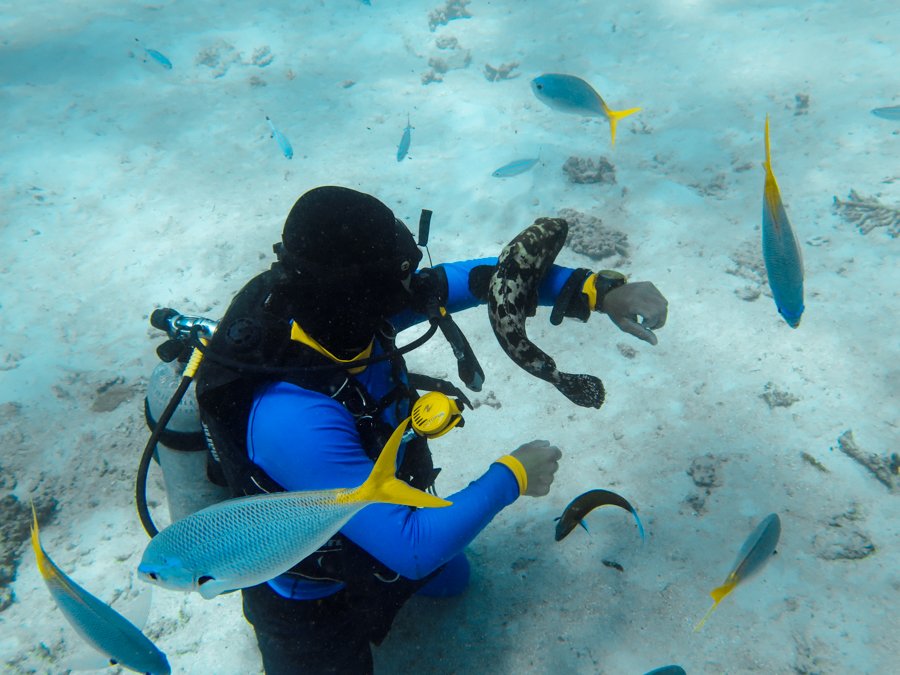 The dive guide had a fish friend at this dive site who acted like a pet dog, the fish even let the guide scratch his belly!

The Great Barrier Reef definitely ties closely for favorite place in our hearts with diving in Turks and Caicos. Both T&C and Australia have extremely large and healthy reefs. After diving some mediocre reefs, the appreciation of healthy plant life and amazing numbers of fish really goes up. I think one of the best parts about this reef wasn’t that we were surrounded by 50 million bajillion fish all at once (which we were!) but also the range of fish. Little tiny guys that were maybe half of an inch and huge suckers that were about 4ft long. Colorful and not. Ugly and beautiful. Fast and slow. The GBR has it all. 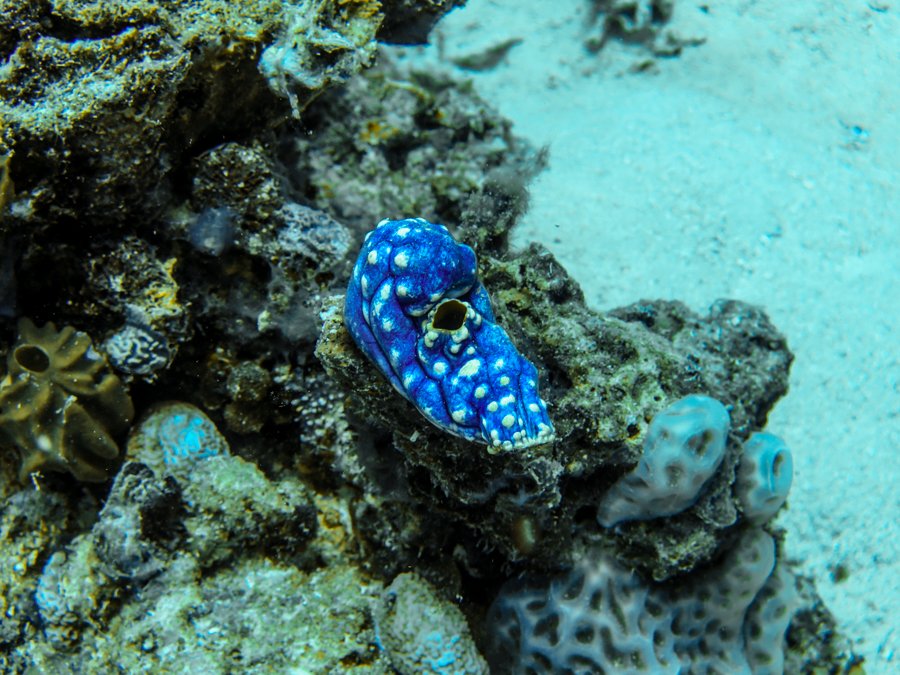 Not a clue what this thing is

Not one diver or snorkeler was left behind. Queensland actually has set up some serious safety precautions, including having everyone sign on and off the boats. Unfortunately we did see some pretty bad abuse of the coral, though this wasn’t Poseidon’s fault at all. Those were just some shitty divers who didn’t understand that one tiny touch on the coral can do a lot of damage. And those guys were very handsy with the coral. They got a good talking to from the divemasters though, which we really appreciated. If they didn’t do it – we were going to!

Overall, I can highly recommend diving with Poseidon. They are knowledgeable, approachable, and safe. They take good care of their section of the reef and we saw some amazing views. 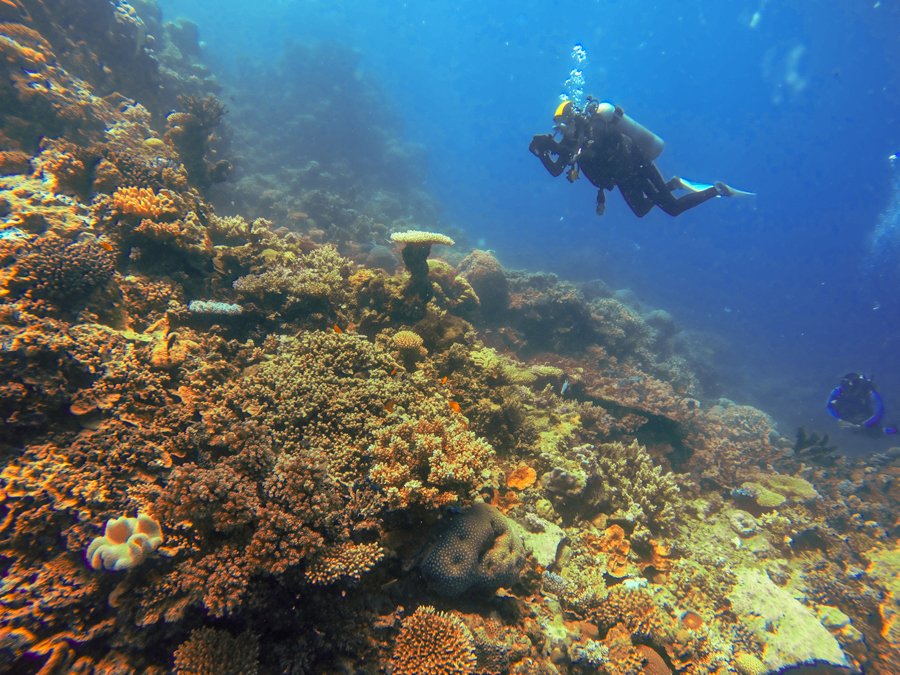 Theres just so much going on, it’s hard to capture it all 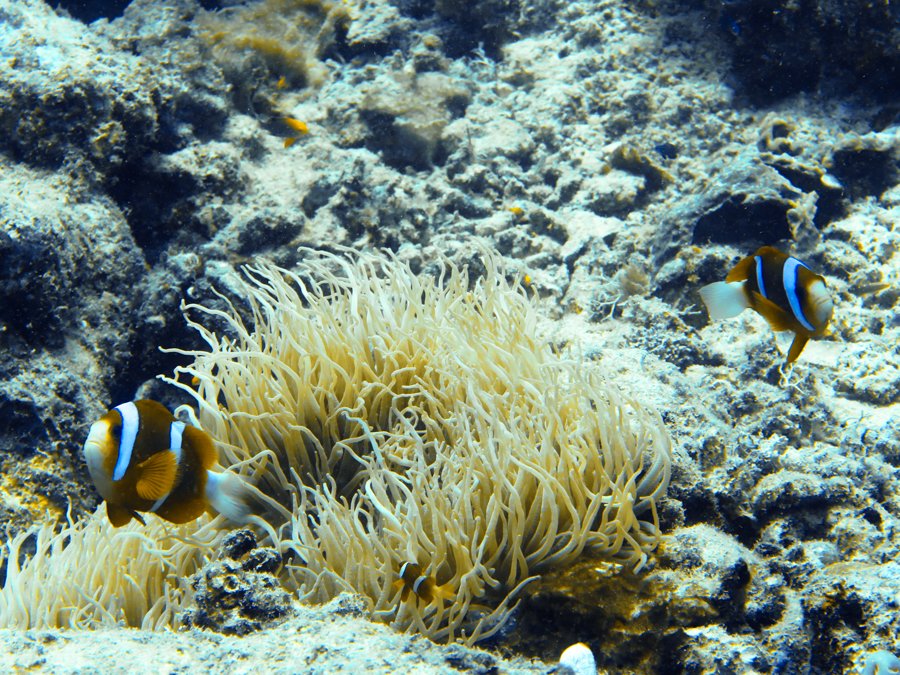 Nemo, is that you? 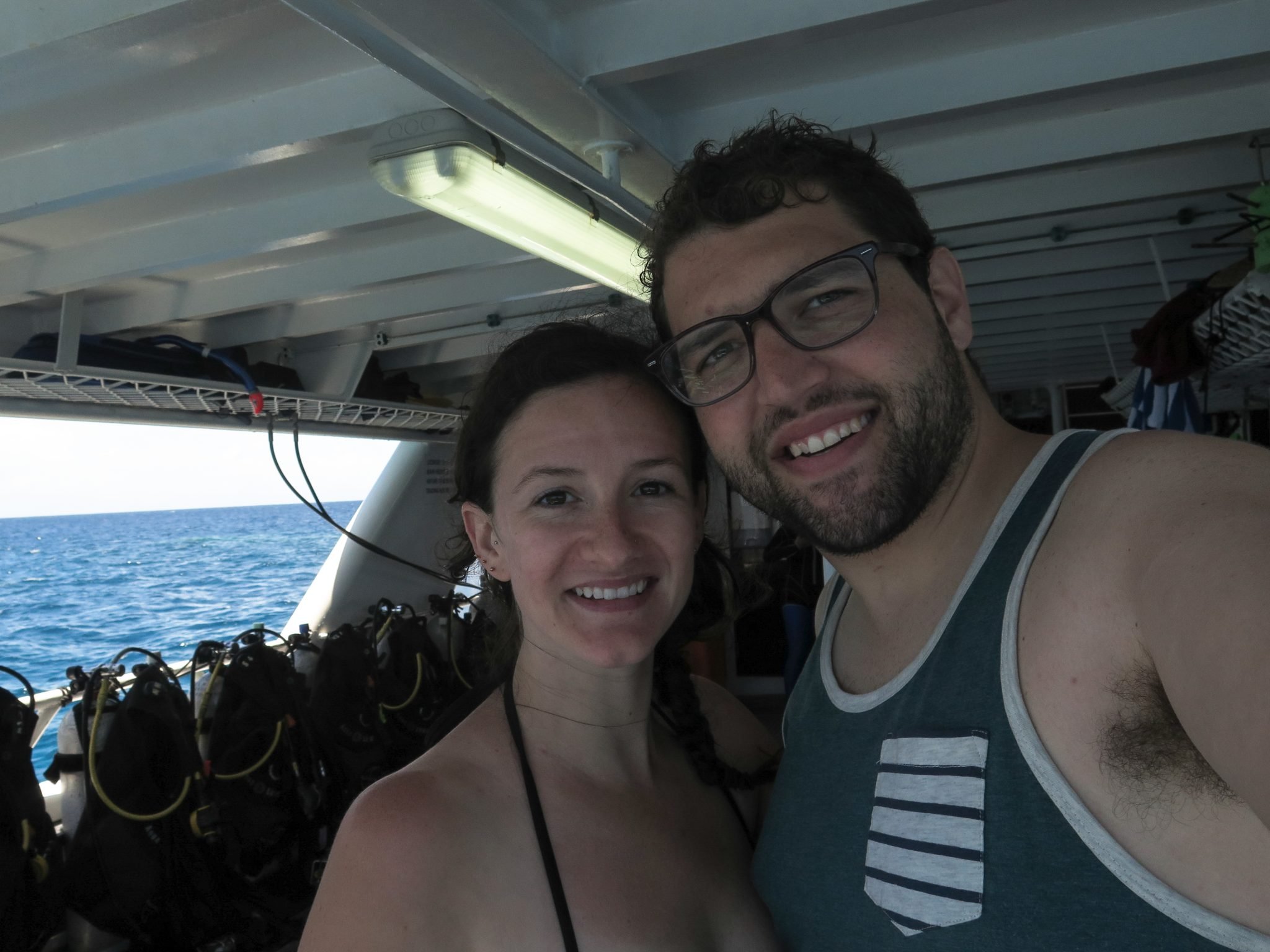 A bit tired, but so satisfied 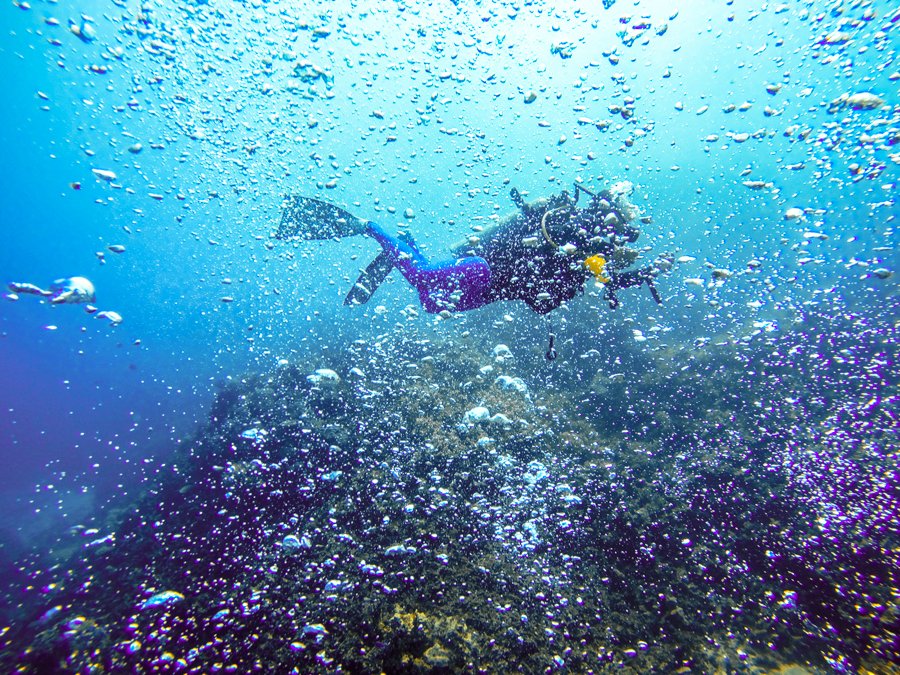