The Cape Trib Beach House is literally located at the end of the road. The mountainous paved two land road up to the top of Queensland ends right at the entrance to The Beach House. We ended up here slightly by accident, we had booked an overnight Daintree Forest tour with a travel agent and called to re-confirm with the tour company and they said there had been some confusion as to the sleeping arrangements, but the guy pulled some strings and got us in at “the Beach House”. We had no expectations on if this was a better arrangement or a worse one – but we thanked the guy and went with the flow.

After the crocodile hunting and the cassowary dodging on the tour during the day, and as the settlements and towns faded away, the beautiful isolation of this place became apparent to us. 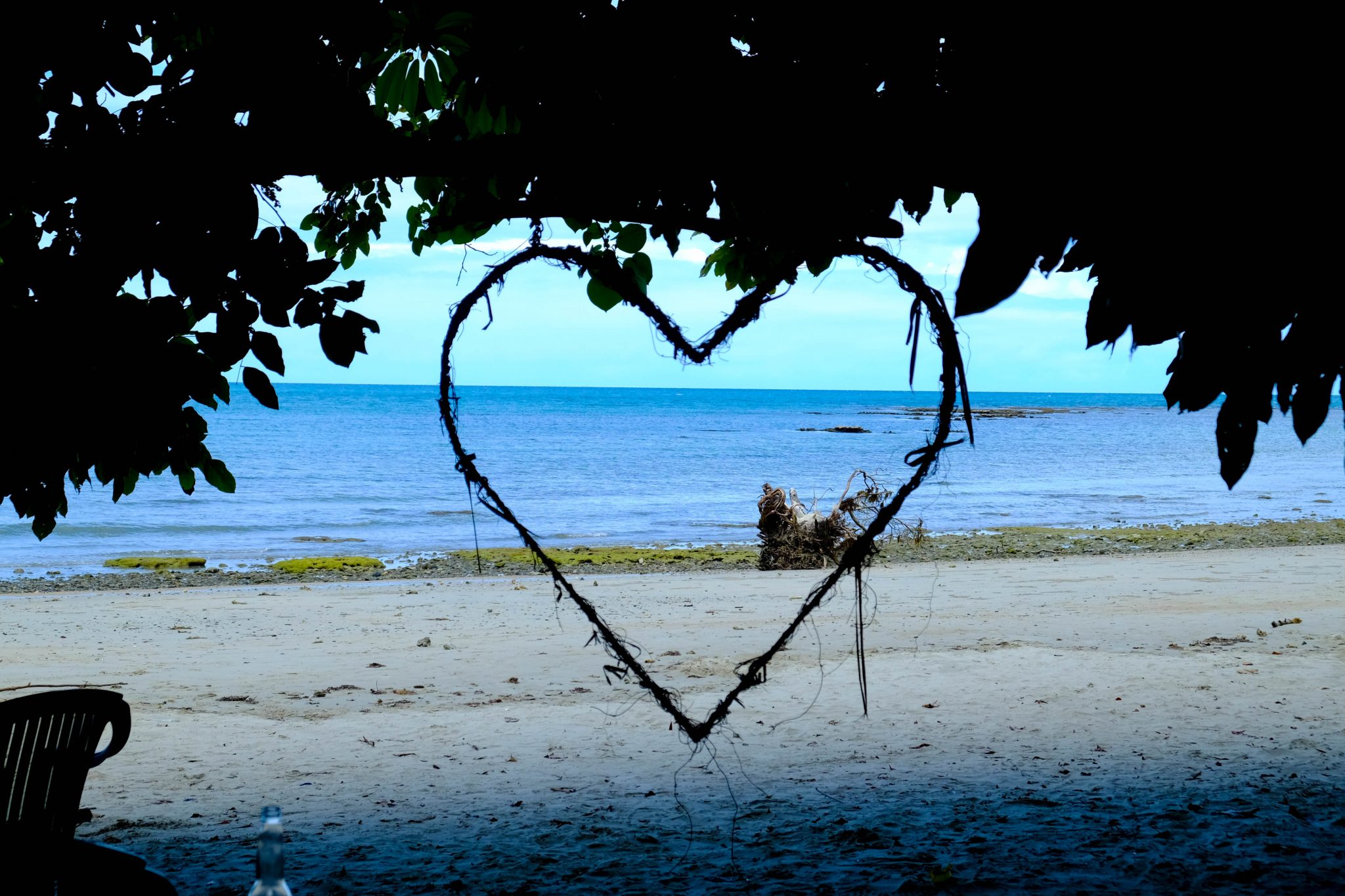 Cape Tribulation is located in the north of Queensland, Australia, It’s touted as the place where two UNESCO World Heritage sites meet – the Great Barrier Reef and the Daintree Rainforest. Both are breathtaking. The rainforest is apparently one of the oldest in the world, starting about 100-180 million years ago. The GBR relatively new at only 18 million years old. With two oldies like this – there can’t help but be some cool stuff living around. This was apparent over and over, every turn we made and there was something else larger than life or prehistoric lurking. We saw the legendary cassowary, a goanna, and plants with bigger leaves than I stand tall. 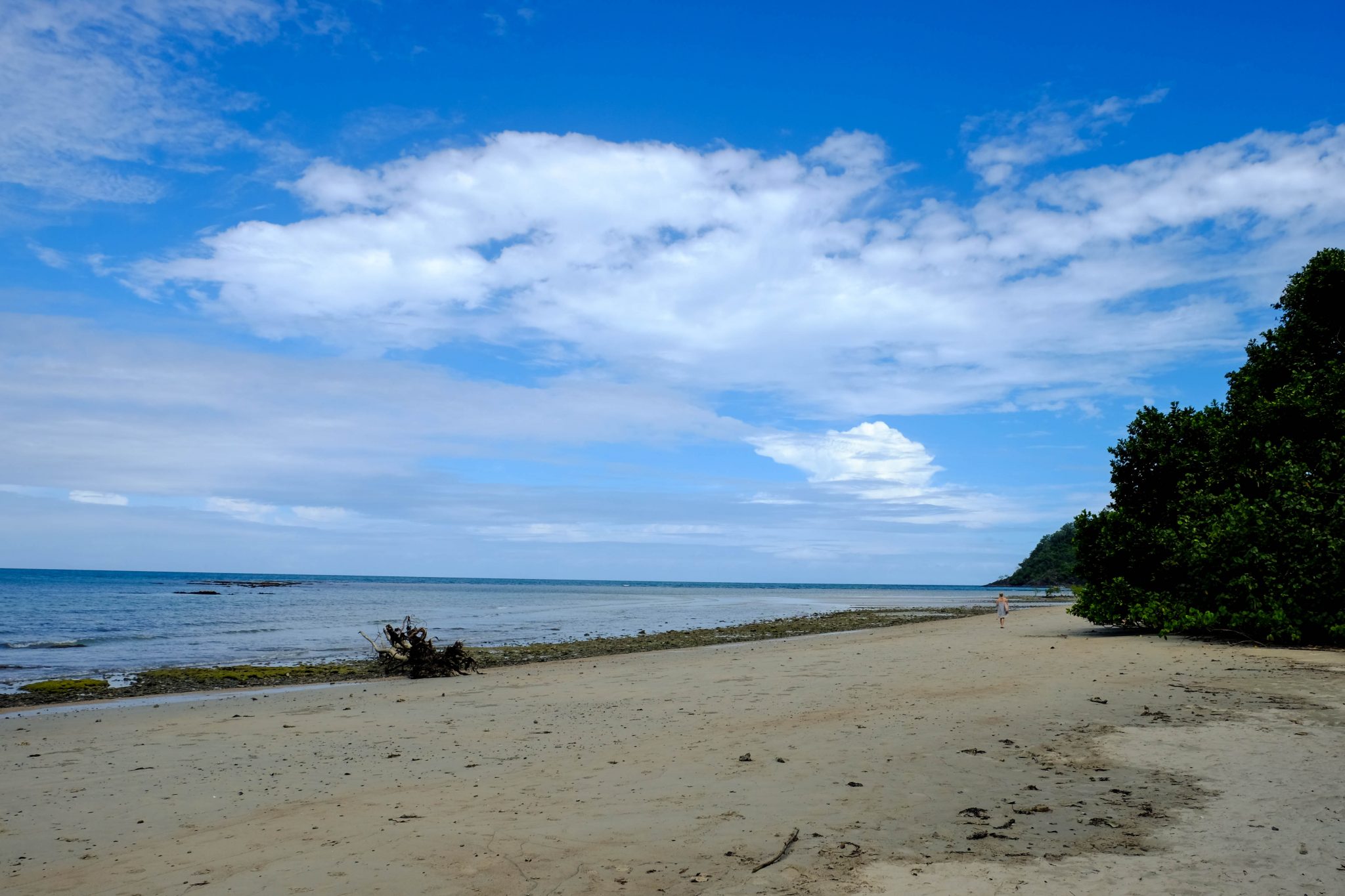 The Beach House is a YHA facility, which we’ve learned comes with a bit of quality expectation compared to other hostels. The rooms are a bit nicer, the kitchens are a little bit cleaner. This one was fairly accurate to that, but instead of a large shared building, the hostel was made up of many different cabins. Ours was a private double room with it’s own private bathroom. We couldn’t complain about any of it. We were given sheets for our room, they were clean and no spiders to be found inside. 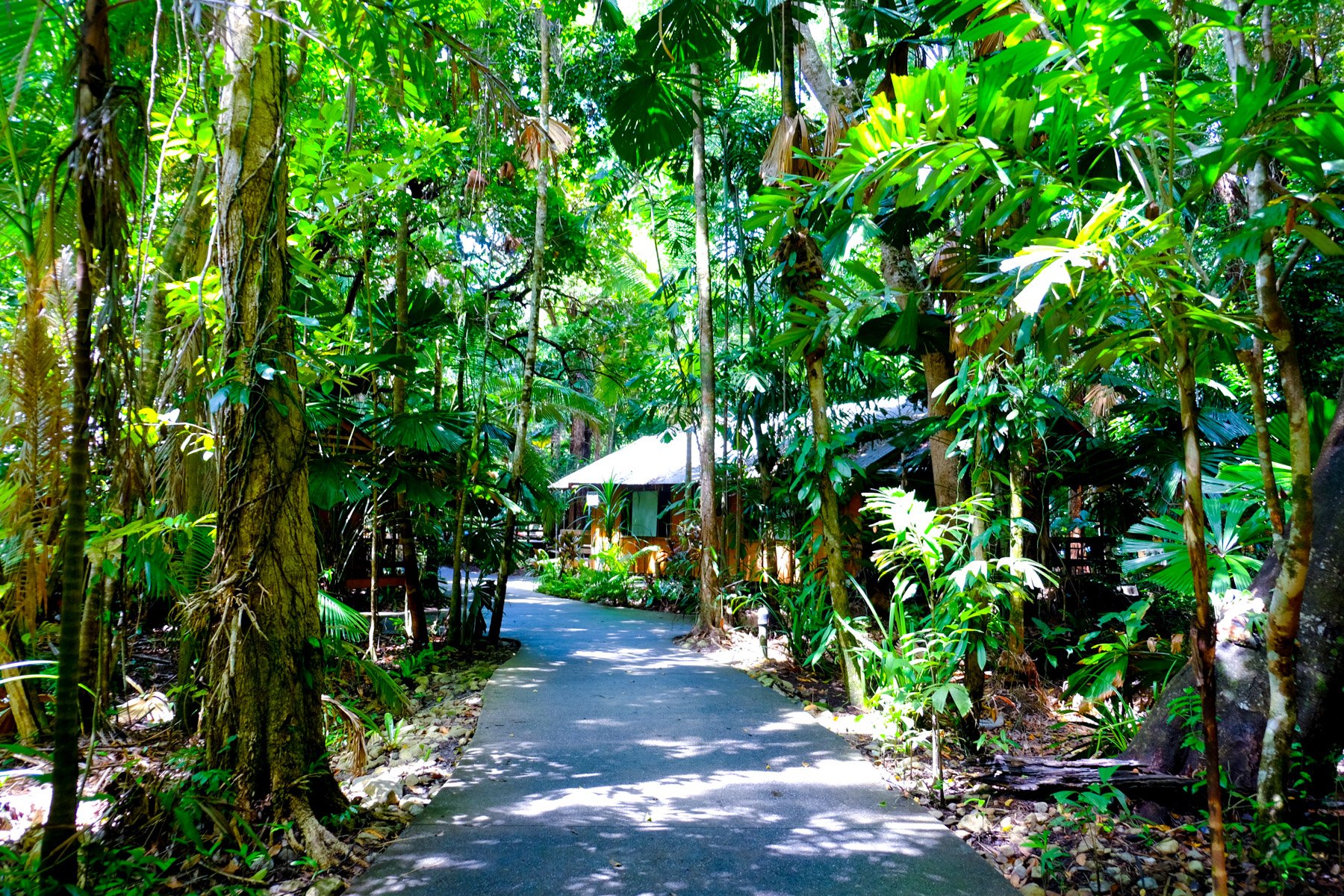 The cabins are tucked into the wilderness 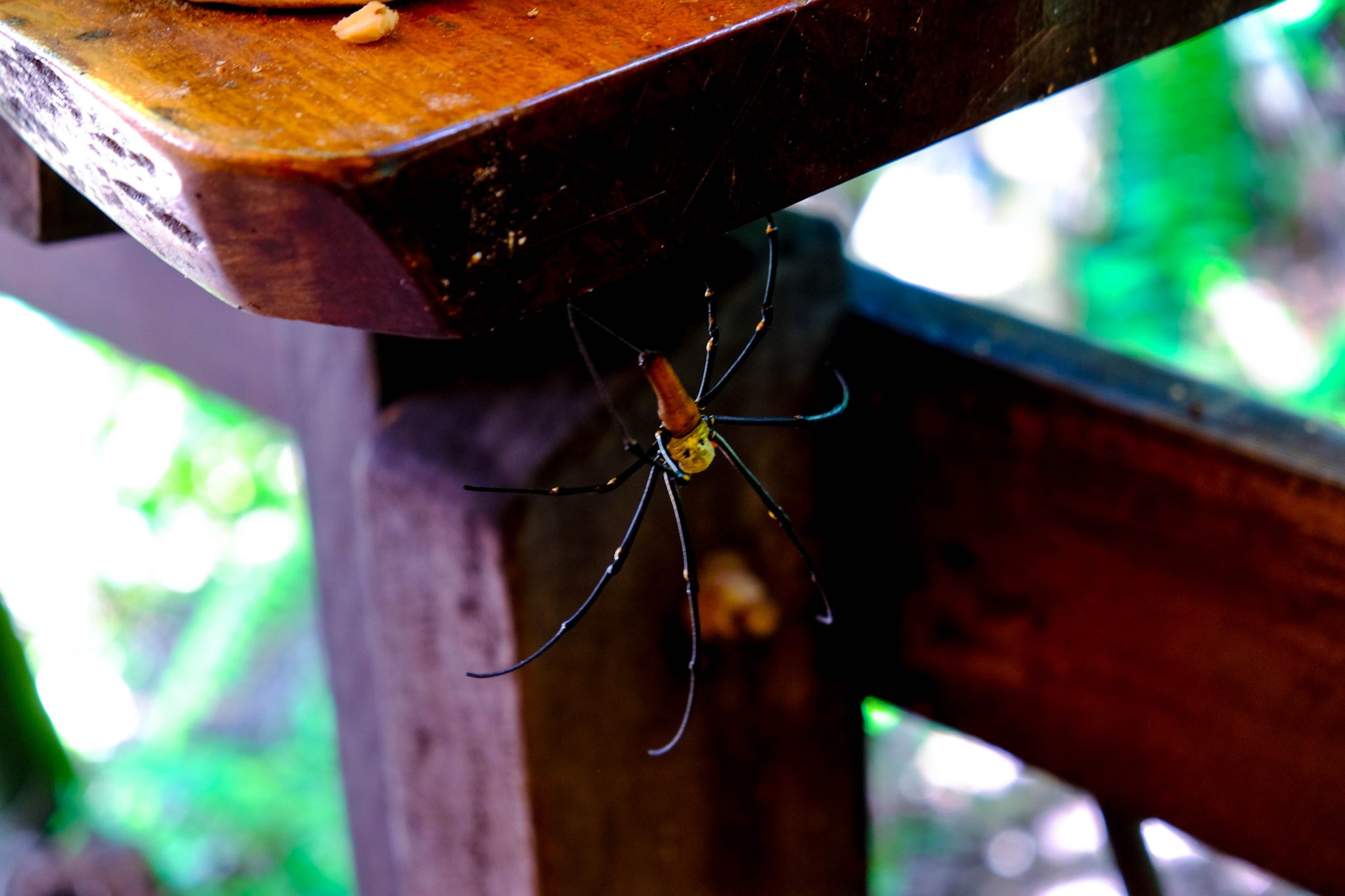 A golden orb. Called as such because when the light hits their web at a certain angle and time, it can look like a big glowing orb.

Speaking of the spiders, the wild life situation was real. The most apparent thing we shared the forest with was the Golden Orb Spiders. These gigantic arachnids are not fatal, their bites “only leave you hurting for a few days”…oooh goodie. For the most part, I didn’t really see them move too much, they mostly just hung out around their (HUGE) webs which were off of the main walkways. We also saw a bunch of birds, a goanna, a peppermint bug, many green ants and more golden orbs. It was incredible being in a place where you never knew what lurked around the corner, the pathway you just took five minutes ago could now be covered in something completely different. This location definitely felt like we were living among the wildlife, not the other way around. 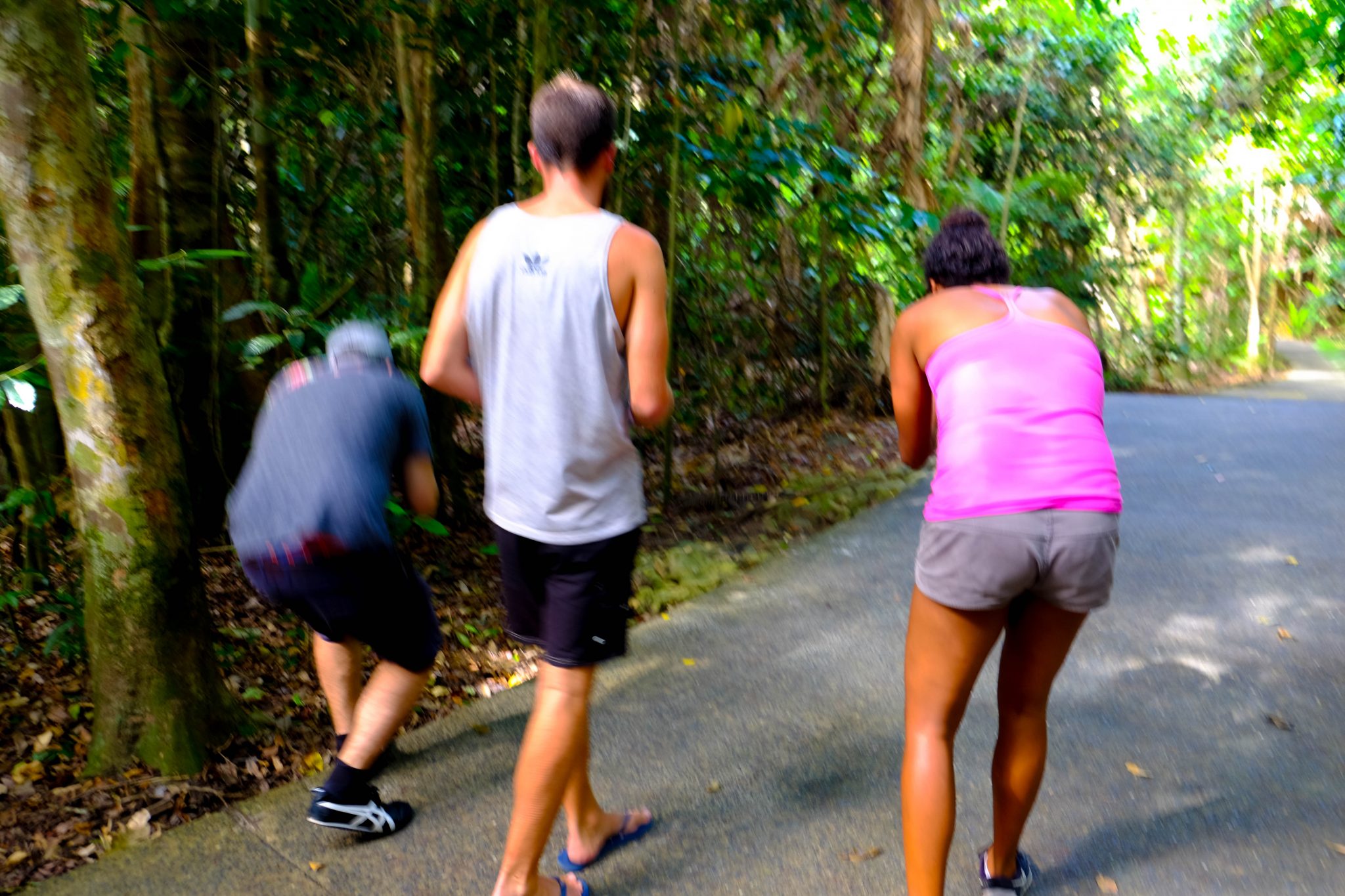 The only thing we didn’t see that we expected to was a crocodile. I’m not all together that sad about it. Now those are some prehistoric animals. They are freshwater and salt water crocs, and several local people told us horror stories of a tourist being eaten only weeks beforehand. They all told us a simple rule, don’t be near the water, especially at night. The latest tourist to be eaten was knee to waist deep in the water after dusk, both parts of that story being no-nos. 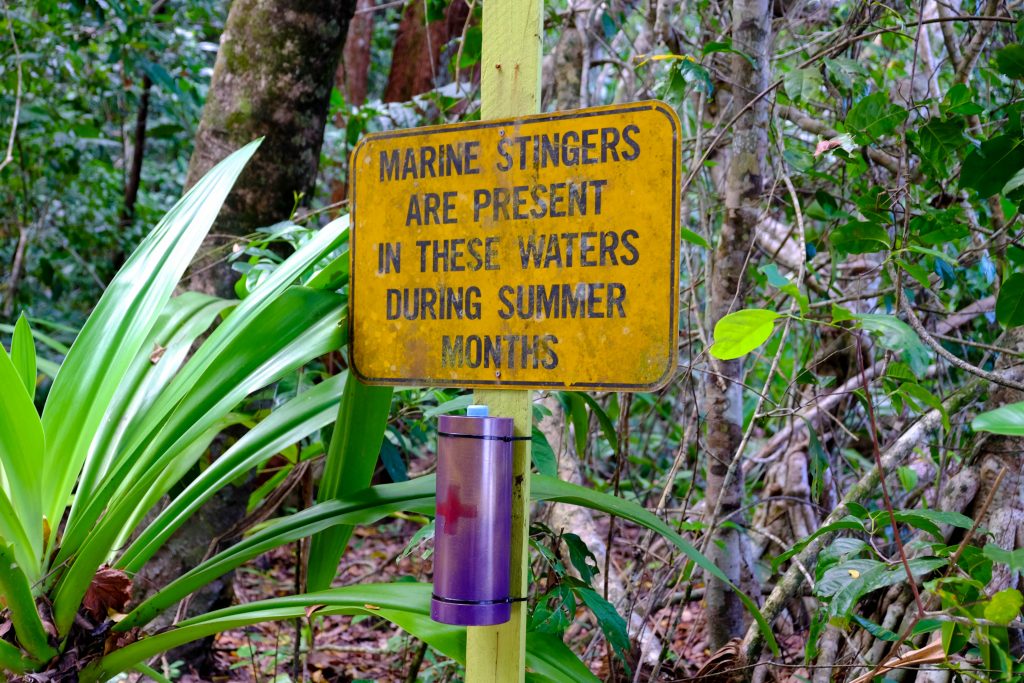 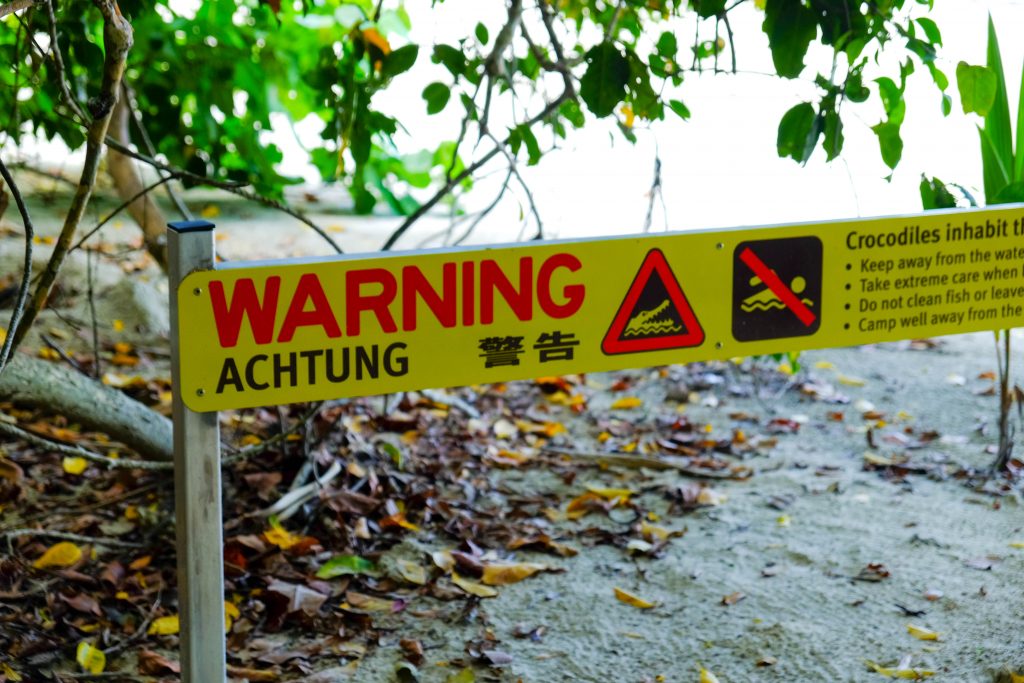 One of our favorite parts was a free nature walk put on by one of the employees. About 12 people joined up for this afternoon walk along the beach. The guide’s love of the area and the animals he shared it with was apparent. We saw tons of wildlife that we might not have noticed if not with the group. 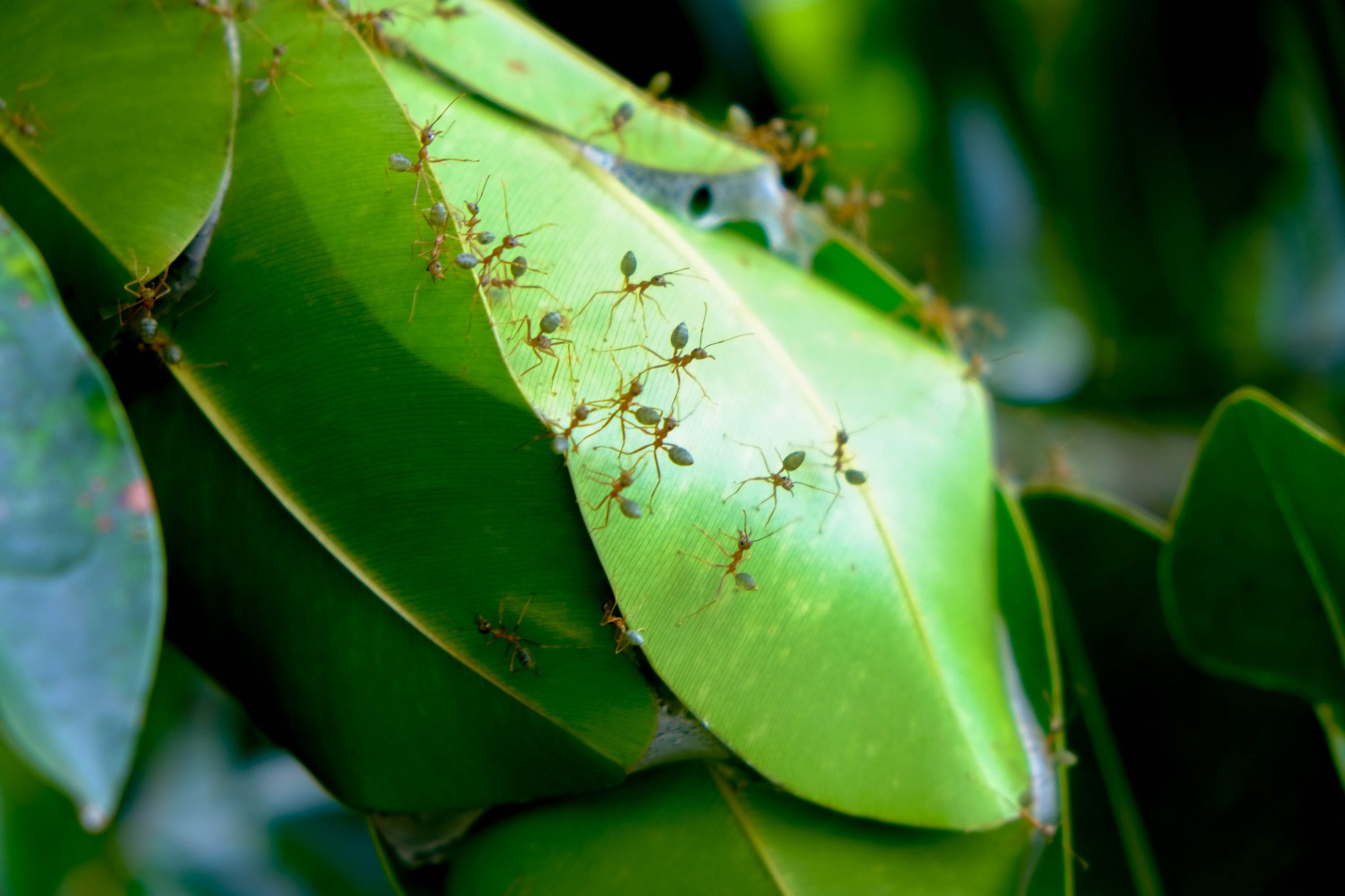 Every nature walk we went on, each guide told us to lick the green end of these ants. It allegedly tasted like lime 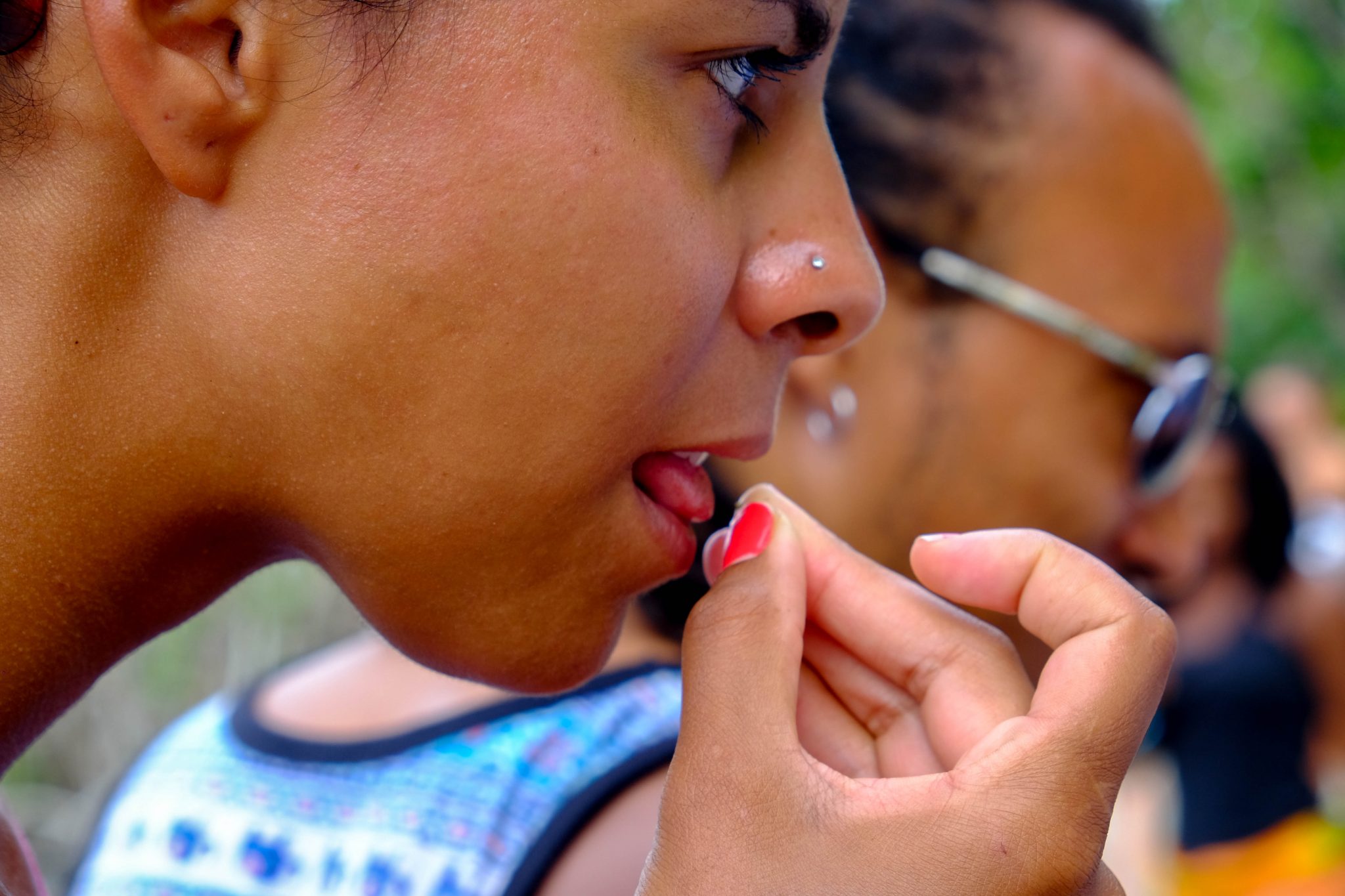 We weren’t brave enough, but a lot of other people were! 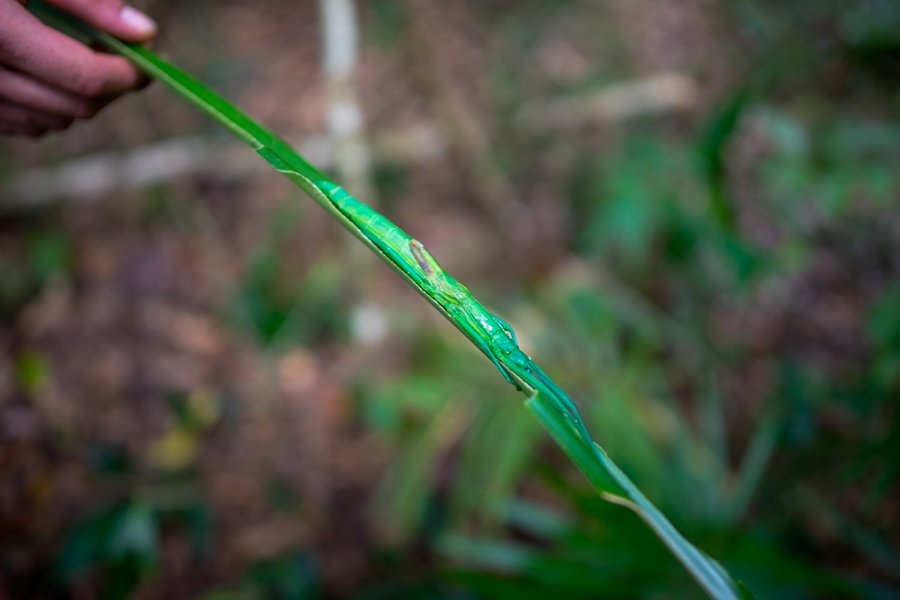 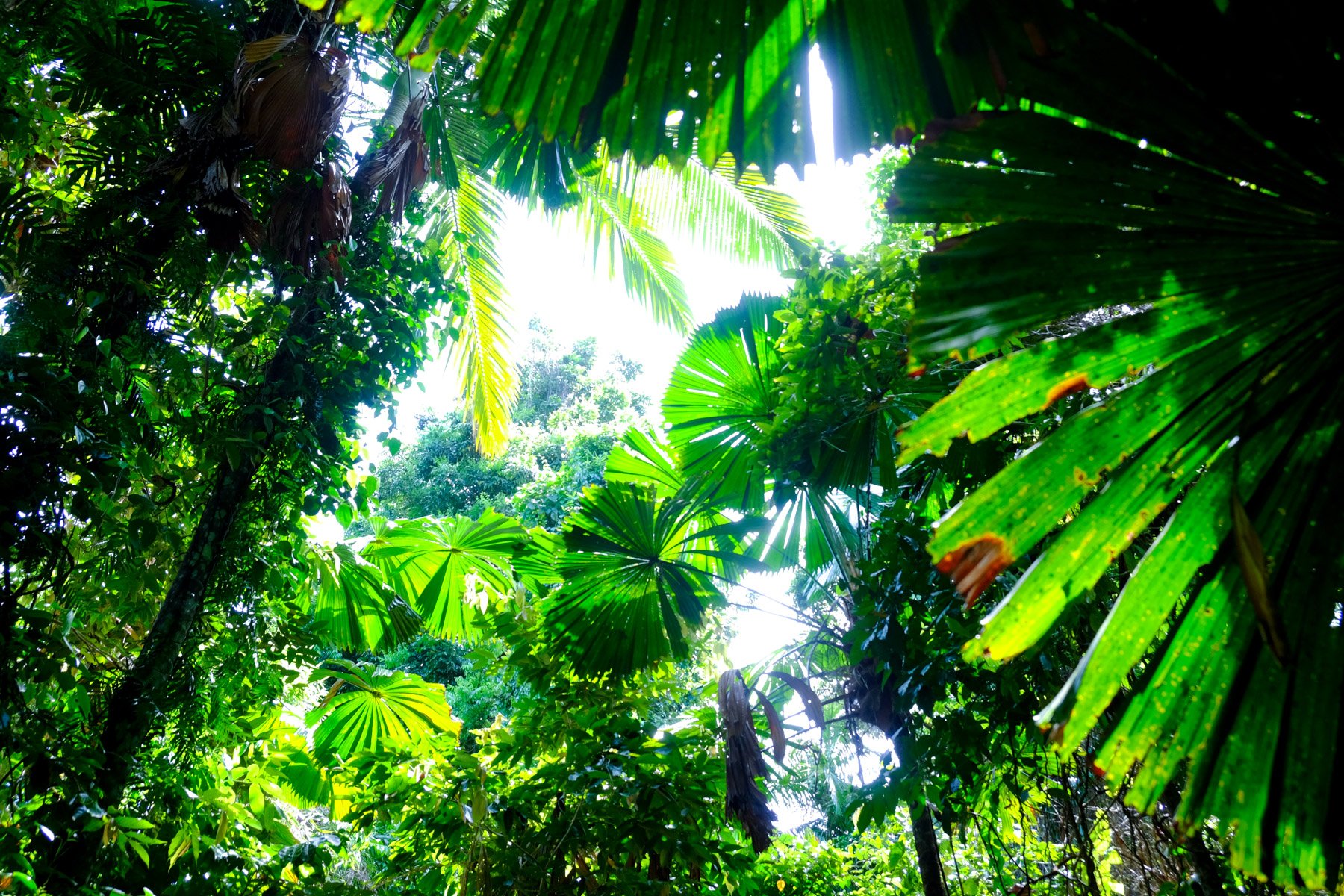 Overall, the Cape Tribulation Beach House was a super relaxing, pleasant place to stay overnight. I wish we could have stayed a few more days. Like most places around Oz, the area was beautiful, and so were the people.