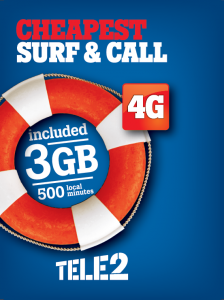 Tele2 is a pretty large carrier in Croatia and by far had the best PAYG (pay as you go) plan. They offer a pre-paid plan of 50kn or about $7.50 for 3GB of data, 500 minutes for a period of one month. It’s easy to find one of their shops in any of the big towns around Croatia.

Tisak – Not a great deal but really convenient.

In Croatia the Tisak stores are everywhere and have a couple of options for PAYG SIM card. The only ones I could find were 2GB of data that expired after 7 days and cost about $10. We were going to be here for a least a month so $40 for data is a terrible deal. We found a Tele 2 store, one of the most popular providers in Croatia besides T-Mobile. Even if you only plan on being in the country for less than a week, the Tele 2 plan still a better deal than the Tisak cards.

Hrvatski Telekom – Dunno
We didn’t check their PAYG offers. They seemed to only offer monthly contracts.

Anything Else – Verizon, AT&T etc.

DO NOT PAY FOR DATA ROAMING EVER. Anything Verizon or AT&T try to offer is highly overpriced. Almost all countries you visit will have some sort of PAYG (Pay As You Go) SIM cards you can easily swap out on your current phone for a fraction of the cost. That is assuming you have a phone that can change SIM cards. I think its more uncommon to find phones that do not rather than do. Once you arrive at your destination it’s pretty easy to find a local cell phone store/convenience store/tobacconist that will sell you a SIM card.

This wikia site has a pretty comprehensive list of most countries and their sim cards.
Its a great place to start when choosing a local sim card.

We’ve also found that some companies might offer sales or temporary deals on their PAYG sim card plans. These are usually at network stores rather than convenience stores. They’re also usually more knowledgeable about their different plans than a kwik-e-mart would be.