All our host had to do was mention there were “sea caves” in Ancona and already our interested was peaked. When he added in that the caves were inhabited, and coveted by the people of Ancona, and we knew we had to see them.

The sea caves (the Grotte del Passetto) were built into the cliffs by fishermen in the mid 1900’s. They were originally intended to be used as little boat garages. Most have been passed down father to son – and while some are still used for their original purpose – most of the heirs (known as the “Grottaroli”) of these beach caves  have converted them into adorable, colorful little beach cabanas, complete with electricity, running water, and little kitchenettes. We walked past many families having big meals, with seafood caught straight from the Adriatic right in front of their caves. We were told that sometimes these caves do get put up for sale, but the price is very expensive, and as the caves are exposed to harsh weather six months out of the year, they are also very expensive to maintain.

We approached the beach caves by walking down the steps in front of the Monumento ai Caduti WWI monument (pictured below) and heading to the left once we got to the bottom. Within a short walk, we started to pass many of the caves. We weren’t sure if we were allowed to walk along the caves but no one paid us much attention even though our pasty, untanned skin was a sharp contrast to tanned Italian bodies of all shapes and dimensions scattered around the caves and rocks.

As it was getting quite hot, we decided to join everyone down on the large white rocks and attempt a swim. We followed a little walkway and climbed out on the rocks, and ended up sitting next to a large rock formation called “The Pope’s Chair” (pictured in the first photo).  After laying out our towels, and watching some amazingly executed dives from a trio of elderly older ladies, it was our turn. Derek jumped right in, while I took a little more coaxing. As I wasn’t sure my diving skills could stack up to the previously mentioned trio, I chose to ease my way in. The choice for footholds were slippery rocks or what Derek lovingly called “sea carpet.” As much as I love the ocean, I have a real problem with mysterious surfaces and animals touching my feet. I longed for my water shoes.

Pretty sure the little boy in the boat must have thought we were very pale sea monsters.

In the end, the clear and beautiful water won out over the less than appealing sea carpet and I had a great time swimming around. We were so sad to not have brought our goggles as we could tell there was so much going on around us. We swam around the shallow little cove and enjoyed the incredible weather.

As most of the caves were actively being used, especially the more interestingly painted and maintained ones, they were unsurprisingly hard to photograph. We tried to be as respectful as possible while satisfying our curiosity. The Grotte del Passetto are a beautiful little piece of Ancona’s history that have to be experienced in person! 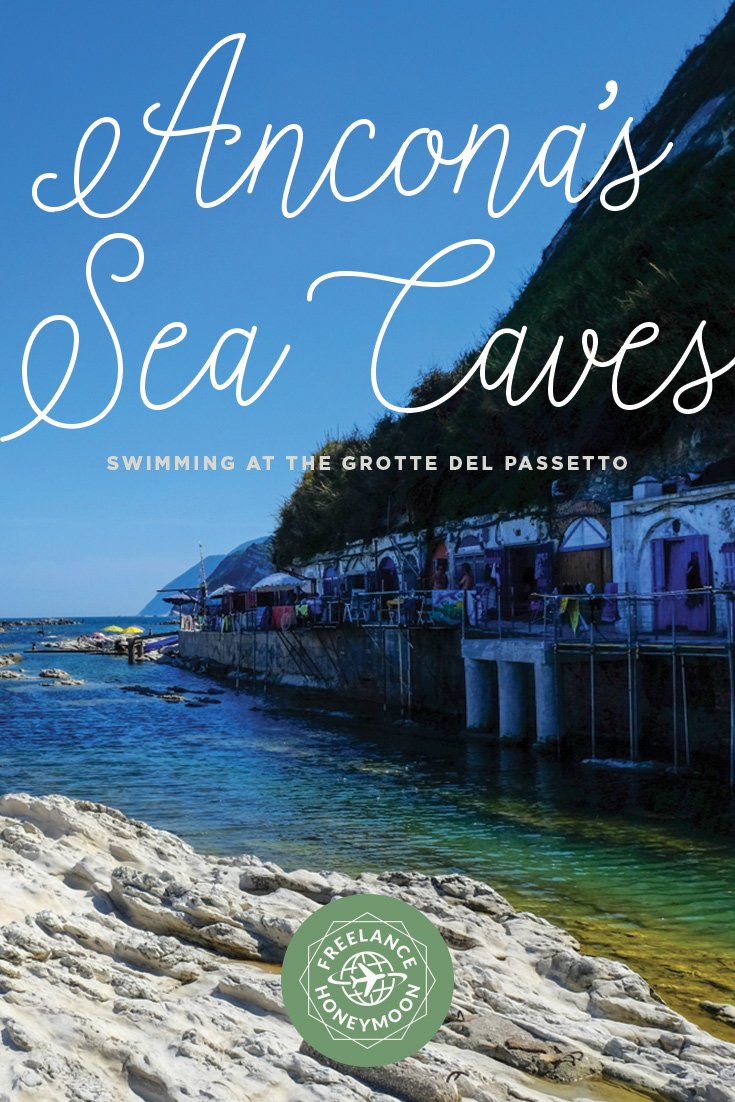