Spending 20 hours on a layover in any city is barely enough to see and do anything, especially if you take into account that during those 20 hours you will be going through customs, finding your way out of an airport and into a downtown you’ve never been to before, and sleeping. But! You make do with what you’ve got. And that’s what we had in Prague.

We debated momentarily if we should just “accidentally miss” our morning flight to Milan, so we could have more time, but after some further investigation, we realized that our airline would likely cancel the return leg of the journey. So, less than a full day it was…so what did we get up to?

We exited Václav Havel Airport into the bright and airy land that is the Czech Republic. After a somewhat confusing trip to the ATM, ticket machines, and tourist info center, we were off on the bus then the subway to our apartment. We were located in Prague 2, in a neighborhood called Vinohrady which is very cute and residential, and not too far from the Old Town Square. We met up with our Airbnb host, a very nice older lady named Vera. Vera’s apartment is instagramer’s dream, crazy wallpaper mixed with incredible amounts of plant life. Upon learning that we really only had the afternoon to see her beloved city, she quickly set out to give us the best route to see as much as possible.

We hopped on the tram after several confusing attempts to figure out where to buy our tickets. First, we watched people get on and off with no apparent ticket buying, then we searched in vain for ticket machines. We ended up heading underground to a subway station and talking to someone in an information booth who was able to sell us tickets. I’m not sure if this is the only way to buy them. Actually, I’m not sure if anyone else even buys tickets. We noticed little machines to validate your tickets once we got on the tram. We didn’t really see anyone else using them, though plenty of people were getting on and off.

Though obviously, it would be great to walk around and slowly absorb the sights fully, the tram seemed to be a great way to quickly see a bit of the city. We saw many streets we would have loved to explore, and made mental notes to visit them later if we had time (we didn’t, sadly). We trammed it up to where we vaguely thought the Prague castle was. We were a little off but enjoyed wandering to find it. That day was a bit rainy on and off, so we hopped in and out of pubs to avoid the biggest downpours by filling our bellies with liquid, instead of our hair.

The castle looked pretty cool, we didn’t have a chance to tour the inside but took photos in front of it instead. There are guards that stand outside that look very similar to other guards you see at palaces around Europe – specifically thinking of Buckingham Palace. We had a bit of a giggle when one of them had an interesting silent conversation with a very pretty young lady. She seemed to be talking to him, and he was just responding with his eyes. We can only guess he was directing her where to meet him after his shift. Perhaps it was his wife, for all we know.

The walk near the castle also provides excellent views of the city. We were lucky that the rain took a break and gave us a gorgeous view, complete with rainbow.

I make Derek take pretty much this exact shot everywhere we go.

After the castle, our next goal was to locate ourselves a bizarre round snack that we had seen stands for everywhere. It turns out it’s called a trdelník, and while the exact history of this tasty roll is not super clear – at least sources can agree that it wasn’t originally a Czech treat, but one that has been embraced by the tourism industry. It’s basically a cylindrical donut that can be filled with any number of delicious things, such as nutella, ice cream, or just sugar and crushed almonds. We chose nutella. It was delicious.

Figuring out how to take a bite was an interesting experience.

We then sampled more of Prague’s beer offerings.

By following the main streets, and the tide of tourists, our next stop was the Old Square. If there was ever a time to feel like you are in a Disneyland ride of what someone thinks that a medieval square looks like, this is it. It’s huge, got big touristy restaurants, and it’s swarming with people. We saw a lot of mysterious/slightly sketchy looking people on Segways who didn’t seem to be tourists, nor were they tour guides.

A big thing on my must-see list was Prague’s Astronomical Clock. It was created in 1410 and can tell you way more information that you could possibly want to know. Things like the time three different ways (Old Czech time, Central European time, and Babylonian time), and also the month, the zodiac, movement of the sun, phases of the moon, and the equinoxes. I think the combination of the sun setting, the fact that we didn’t see it on the hour, and the jetlag kicking in, I was a little underwhelmed. Still very beautiful though.

We explored the square and peopled watched, then we walked home. And suddenly – our time in Prague was over. We caught a few hours of sleep, then got up at 4:30am to catch an Uber to the airport for our flight to Milan. While this might sound luxurious for New York standards, Uber is surprisingly affordable in other places. I think the 30-minute ride cost us maybe $4-5.

Our 20 hours gave us a quick glimpse into a very interesting city, one that we know we will be back to explore more thoroughly. If you want to see the full collection of Derek’s photos of Prague – check out the flickr page here. 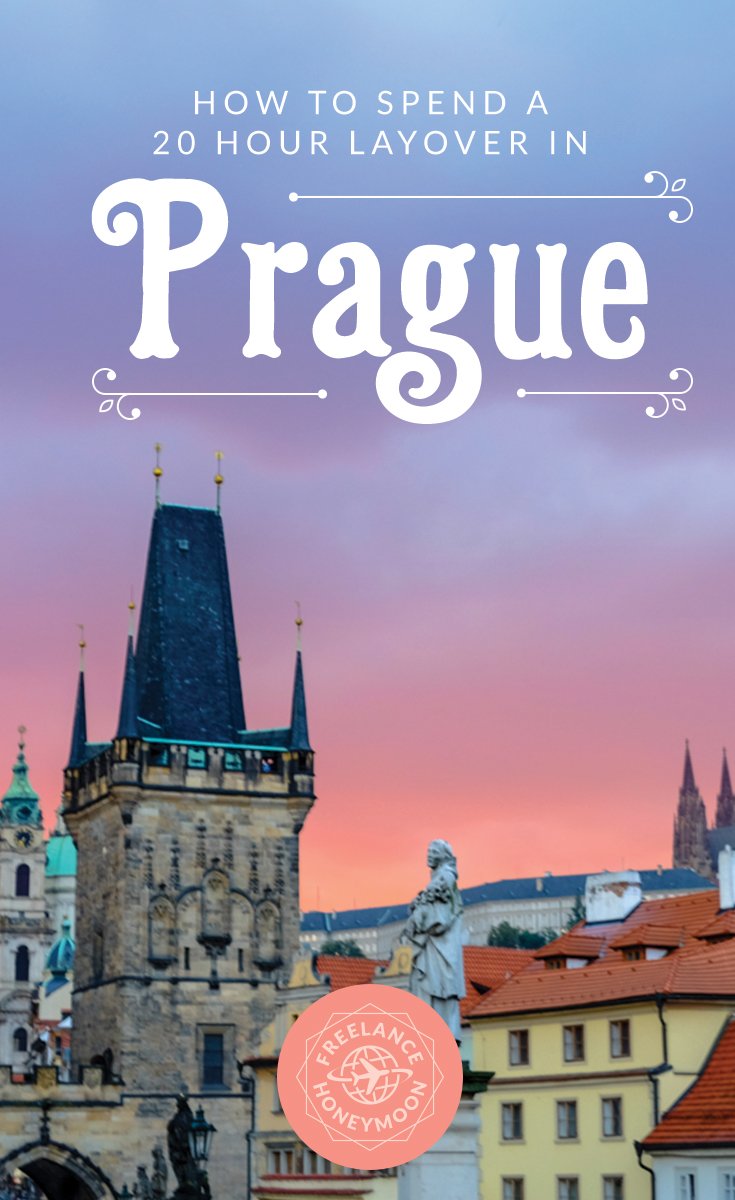